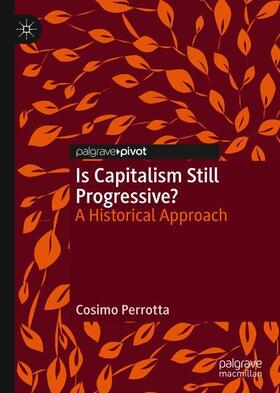 The economic crisis of 2007/2008 has prompted much debate as to what caused it and what remedies may be implemented in order to regain a healthy economy. This book addresses these issues through the lens of capitalism with a focus on labour economics, arguing that capitalism, and the employment of young people and migrants, may be a suitable antidote to the ongoing political crises in Europe that are taking place as a result of the financial crisis.

Using economic history and the history of economic thought to inform debate, Is Capitalism Still Progressive?: A Historical Approach will be of interest to policy makers (especially in emerging countries), students and researchers interested in exploring the pros and cons, and persistence, of the capitalist system.

1: Capitalism creates progress. 2:The dark side of capitalism and its myths. 3:Capitalistic accumulation. 4:Plundering the world. 5: The welfare state and its crisis. 6: broken promises. 7:The new challenges. 8: Labour-based development. 9: Conclusions: Beyond the borders.

Perrotta, Cosimo
Professor Cosimo Perrotta has been Council Chair of the European Society for the History of Economic Thought, published many articles in the main international journals of this discipline, among other monographs published Consumption as an Investment. The Fear of Goods from Hesiod to Adam Smith (2004) and Unproductive labour. History of an Idea (2018), Routledge.