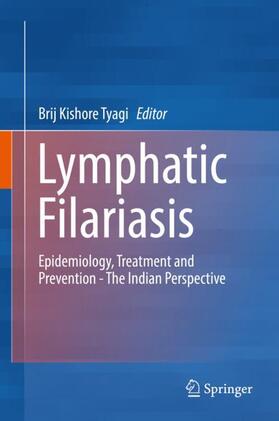 Lymphatic Filariasis (LF) is a group of human and animal infectious diseases caused by nematode parasites of the order Filariidae. Often neglected, it is one of the oldest and the most debilitating tropical diseases (NTDs), transmitted from human to human by mosquitoes bites, particularly the brown black mosquito known as Culex quinquifasciatus. LF is a major public health problem in many parts of the tropics, especially India, which accounts for as much as 40% of total global cases. As a leading cause of permanent and long-term disability worldwide, the parasite infection imposes a severe physical and socioeconomic burden. The World Health Organization (WHO) estimates that 1.4 billion people live in high-risk areas – 120 million of which are already infected with LF, including 22 million children below the age of 15 and about 76 million who suffer from damaged lymphatic and renal systems.

India has made great strides toward eliminating the disease, and these advances are of global significance. They include early diagnosis mechanisms, vaccine product development, detection of parasites in the vector, and studies on parasite evolution trends in nature as warning signals. Reports on the successes and failures are needed to enable measures to be taken to avoid disaster and ensure a smooth transition from endemicity in India to the elimination of lymphatic filariasis by 2020. This book, which gathers highly original contributions on various subjects related to lymphatic filariasis, discusses the latest scientific research that will help the nation to achieve this milestone. It also serves as a guide to many other countries struggling against this highly debilitating and incapacitating disease.

Tyagi, Brij Kishore
Professor Dr B,K, Tyagi (b. 23rd July, 1951) completed his MSc (Zoology) at Meerut University in 1974 and PhD (Entomology/Zoology) at Garhwal University in 1978. He retired from ICMR in 2013, after a more than three-decade, highly distinguished career, as Scientist 'G' (Director) & Director in-Charge at the Centre for Research in Medical Entomology, Madurai. Since then he has served as a Visiting Felloow & Professor at Bharathidasan University, Tiruchirapalli, TN, and Punjabi University, Patiala (Punjab). Inter alia he has been also serving as a Core Faculty of the DST-SERB School of Insect Biology at Hyderabad University, Hyderabad and a Guest Faculty, MLS University, Udaipur. Currently Dr Tyagi is serving as an advisor toSpoRIC, VIT University, Vellore, TN. Dr. Tyagi has published over 605 scientific titles, and 33 books, including a WHO training manual, "Biosafety for human health and the environment in the context of the potential use of genetically modified mosquitoes (GMMs): A tool for biosafety training based on courses in Africa, Asia and Latin America, 2008-2011". He also holds a patent for a 'mechanical mosquito sampler' (Indian Patent # 191635). He won the WHO-TDR First Prize in a worldwide competition in 1995 and the ICMR's prestigious Dr. MOT Iyengar Memorial Award in 2008. He also served as the First National Representative In-charge of the International Odonatological Society National Office in India from 1981, and as a member in charge of the Odonata Specialist Group, Species Survival Commission (IUCN) from 1985. He is an editor or member of Editorial Board for >3 dozen international/national journals. He has researched extensively on all important vector-borne diseases prevalent in India and was rated amongst the top 15 most productive authors on dengue for the period 2004-2012. He is an expert member on various research committees of ICMR, DRDO, DST, DBT-RCGM etc. He was an expert member of the Performance Evaluation Team for the NVBDCP (GOI) in 2008 and 2013. Currently, he is President of (i) the Society of Medical Arthropodology, (ii) the Jodhpur Natural History Society, and (iii) the Indian Dragonfly Society. He also created the series of annual Medical Arthropodology conferences, commencing 2007. He represented India in preparing the OECD's Consensus Document on the dengue/yellow fever vector mosquito, Aedes aegypti Linn.