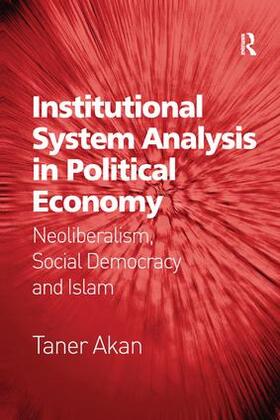 The enduring debate on institutional pillars of contemporary political economies has gathered a noticeable momentum in terms of the change, path-dependence, and varieties of capitalism. By taking a methodological standpoint claiming that ’the current structure and the future of contemporary societies can only be understood by using an evolutionary and macro institutional approach that would explain the trajectories of social structures from a systemic perspective’, this book first aims at formulating a novel analytical framework thus, Institutional System Analysis in Political Economy. This framework comprises, inter alia, a model of path-dependent changes, and then attempts to apply it to the case of the Ottoman-Turkish social system. In sum, the book develops an ’interaction-theoretic and evolutionarily-structured approach’ with an aim to better capture the path-dependence and change of political, economic, and cultural action in terms of their intersectional dynamics.

Akan, Taner
Taner Akan is an Associate Professor of Political Economy and a visiting scholar at the International Development Institute of the King’s College London. His areas of research cover institutional theory, political economy, and economic governance. He was earlier a research associate at the London School of Economics and a visiting scholar at the Max Planck Institute for the Study of Societies.