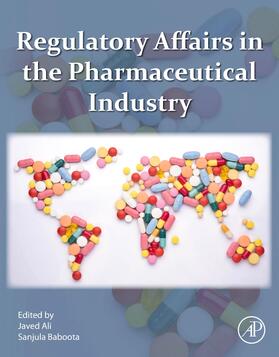 Regulatory Affairs in the Pharmaceutical Industry is a comprehensive reference that compiles all the information available pertaining to regulatory procedures currently followed by the pharmaceutical industry. Designed to impart advanced knowledge and skills required to learn the various concepts of regulatory affairs, the content covers new drugs, generic drugs and their development, regulatory filings in different countries, different phases of clinical trials, and the submission of regulatory documents like IND (Investigational New Drug), NDA (New Drug Application) and ANDA (Abbreviated New Drug Application).

Chapters cover documentation in the pharmaceutical industry, generic drug development, code of Federal Regulation (CFR), the ANDA regulatory approval process, the process and documentation for US registration of foreign drugs, the regulation of combination products and medical devices, the CTD and ECTD formats, and much more.

Ali, Javed
Prof. Javed Ali passed his BPharm and MPharm with distinction from Jamia Hamdard and bagged gold medals in 1994 and 1996, respectively. He earned a PhD in the year 2000. He was a postdoctoral fellow at the Institute of Pharmaceutical Technology, University of Frankfurt, Germany in 2005. He has a total experience of 25 years in teaching and research. Presently, he is working as a professor at the Department of Pharmaceutics, School of Pharmaceutical Education and Research, and is in-charge of IP Management Cell, Jamia Hamdard, New Delhi.

Prof. Ali has been bestowed with several honors; a few of them worth mentioning include the Career Award for Young Teachers by All India Council of Technical Education (2003); APTI-Young Pharmacy Teacher of the year (2004) by Association of Pharmacy Teachers of India; the BOYSCAST Fellowship of Department of Science and Technology, Government of India (2005); American Association of Indian Pharmaceutical Scientists (AAiPS)-IPA Distinguished Educator and Researcher Award 2007 at the Association meeting at San Diego, United States; Research Award 2014 by University Grants Commission, New Delhi; and Indian National Science Academy (INSA) Teachers Award 2018 by INSA, New Delhi for his outstanding teaching methodology and research outputs; in addition, several awards for best paper presentations at conferences of Indian Pharmaceutical Congress, Indian Pharmacy Graduate Association, and Controlled Release Society, Indian Chapter. He has also received certificates of recognition for publications in high-impact factor journals from Jamia Hamdard.
Prof. Ali has received research grants from a large number of agencies including FIP (the Netherlands) and industries. He is actively involved in the field of drug delivery, which includes improvement in oral bioavailability of BCS classes II and IV drugs by polymeric conjugates and nanolipid-based systems and nanoparticulate drug delivery systems for brain delivery. He is supervising scientific research at the postgraduation and the doctoral level. He has guided 76 theses of MPharm and 37 theses of PhD. Presently, 12 PhD theses are under his supervision. He is an external expert for PhD theses of a large number of Indian and foreign universities. He has written several books and has contributed several chapters in books on controlled and novel drug delivery systems of reputed Indian and international publishers. A widely traveled person, he has presented his research work in more than 100 conferences held in India and abroad. He has a list of about 350 manuscripts in journals of repute and five Indian patents granted/applied. He has an h-index of 65, i10 index of 242, and more than 17,000 citations to his credit as per Google Scholar bibliometric data in June, 2021. He has been named in the list of top 2% worldwide scientists in the field of pharmacy and pharmacology and also named in the top scientists in 2019 global list across all fields by a publication of Stanford University in 2019. He has also worked as a paper coordinator of UGC ePathshala project of the Ministry of Education, Government of India, for two papers of pharmaceutical sciences. He is a reviewer to a large number of international and national journals of repute and book proposals from various international publishers. He is an expert for projects review for agencies of various countries. He is on the editorial board of many renowned journals.

Prof. Ali is also actively engaged in committees of various universities/councils/ accreditation bodies/public service commissions, etc. He has been an executive member of the Indian Pharmaceutical Association (Delhi Branch) from 2012 to date. He has been a member of the local organizing scientific committees of conferences. He has been delivering talks on various topics on regulatory affairs in national and international conferences/workshops and for various undergraduate and post-graduate courses. He is a resource person and has organized staff development/ refresher/short-term training programs from time to time. He is a member/life member of 20 Indian and international scientific organizations.

Prof. Sanjula teaches at undergraduate, post graduate and doctoral levels and has also prepared e-content for postgraduate students on subjects like biopharmaceutics and cosmetics. Her research interests include improving oral bioavailability of BCS class II and Class IV drugs using approaches like complexation, polymeric conjugates, lipid based systems like microemulsions, nanoemulsions, solid lipid nanoparticles and nanostructured lipid carriers. She is actively involved in formulating nanoparticulate drug delivery systems for treatment of neurological disorders and cancer. Recently the research group of Prof. Baboota has expanded their research on formulating nanocarriers of combination drugs as combination drug therapy provides additive or synergistic effect, increases the spectrum of treatment, reduces the side effects, helps in overcoming the resistance, improves patient compliance and targets multiple pathways taking part in disease progression. Encapsulation of combination drugs in nanocarriers helps in overcoming the various biopharmaceutical challenges associated with the them thereby creating opportunities for better treatment.

Prof Baboota is actively engaged in supervising post graduate and doctoral research work. More than 65 theses at post graduate level and 30 doctoral research work is being guided by her. Her research work has received financial supports from all the leading sponsoring bodies in India. She has published more than 300 papers which includes original research articles, review articles, proceedings and invited book chapters in edited books in the field of drug delivery. The work has also been presented at various national and international conferences. She has written several textbooks and has contributed chapters in books on controlled and novel drug delivery systems. Prof. Baboota research work has received more than 10886 citations and she is having an h-index of 53 and i10 index of 152 as per the June 2021 Google Scholar data.

Prof. Baboota has guest edited thematic issues for internationally reputed journals and also serves as regional editor and editorial board member for several international journals. She is a referee for a number of referred journal of repute and also a reviewer for book proposals of reputed international publishers. She serves as an expert for evaluation of national and international projects of different universities and funding bodies. She is also on examination panel of a number of University both in India and abroad for Ph.D theses evaluation.

Prof. Baboota has been bestowed with several honours, a few of them worth mentioning include the research award by UGC, Young Pharmacy teacher of the year award by APTI, Dr. P.D.Sethi research paper annual award for her research paper and several other best paper presentation awards. She has also received certificate of recognition for publication in high impact factor journals and citations from Jamia Hamdard. Prof. Baboota featured in the top scientists in 2019 global list across all fields as per the data released by Stanford University and was awarded level 5 certificate in management and leadership by Chartered management Institute (CMI), United Kingdom.

Prof. Baboota her shared her research and teaching experience in several conferences, seminars, symposiums and workshops as a chairperson and invited speaker. She is also actively engaged in various committees of the department, school and University. She is a member/Life member of several Indian and international scientific organizations.