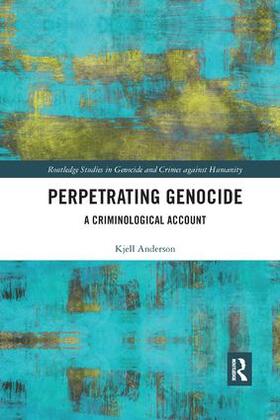 Focusing on the relationship between the micro level of perpetrator motivation and the macro level normative discourse, this book offers an in-depth explanation for the perpetration of genocide. It is the first comparative criminological treatment of genocide drawn from original field research, based substantially on the author’s interviews with perpetrators and victims of genocide and mass atrocities, combined with wide-ranging secondary and archival sources. Topics covered include: perpetration in organizations, genocidal propaganda, the characteristics of perpetrators, decision-making in genocide, genocidal mobilization, coping with killing, perpetrator memory and trauma, moral rationalization, and transitional justice.
An interdisciplinary and comparative analysis, this book utilizes scientific methods with the objective of gaining some degree of insight into the causes of genocide and genocide perpetration. It is argued that genocide is more than a mere intellectual abstraction – it is a crime with real consequences and real victims. Abstraction and objectivity may be intellectual ideals but they are not ideally humane; genocide is ultimately about the destruction of humanity. Thus, this book avoids presenting an overly abstract image of genocide, but rather grounds its analysis in interviews with victims and perpetrators of genocide in Rwanda, Burundi, Uganda, Bosnia, Cambodia, Bangladesh, and Iraq.
This book will be highly useful to students and scholars with an interest in genocide and the causes of mass violence. It will also be of interest to policy-makers engaged with the issues of genocide and conflict prevention.

Prologue: Inside Nyamata Church
1. Introduction: An Unimaginable and Uncharacteristic Act
2. The Emergence of the Genocidal Context
3. The Genocidal Context
4. Propaganda: Communicating the Moral Context
5. Who Kills?
6. Deciding to Kill
7. Killing
8.Rationalizing Killing
9. Coping with Killing
10. After Genocide I: Memory, Trauma, & Rehabilitation
11. After Genocide II: Justice
12. Conclusion: Killing Without Consequence?

Anderson, Kjell (University of the Fraser Valley, Canada)
Kjell Anderson is an interdisciplinary scholar specializing in the study of mass violence, and is currently an Affiliated Research Fellow of the Centre for International Criminal Justice at the Vrije Universiteit Amsterdam.