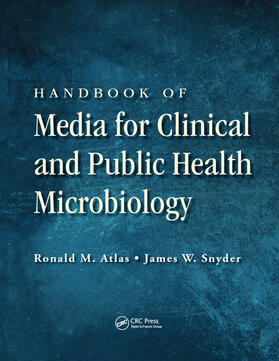 The detection and/or isolation and identification of pathogenic microorganisms is critical for the laboratory diagnosis of infectious diseases. With growth-dependant methods providing reliable means for identifying pathogens, traditional culturing continues to play an integral role in the detection and characterization of known and "new" microbial pathogens. Microbiologists, therefore, rely on a variety of media for the detection, isolation, characterization, and identification of primary and opportunistic microbial pathogens.The Handbook of Media for Clinical and Public Health Microbiology provides a compilation of the formulations, methods of preparation, and applications for media used in clinical and public health microbiology laboratories. It is a significant update to the Handbook of Media for Clinical Microbiology, expanding the coverage to media used for public health epidemiological investigations of disease outbreaks and including media used for the detection of pathogens in foods and environmental samples. Comprising both classic and modern media, the handbook describes almost 1,800 types of media, listed alphabetically, including new media for the cultivation of emerging bacteria, fungi, and viruses that are causing major medical problems around the world. Examples of emerging pathogens are extended-spectrum beta-lactamase (ESBL)-producing bacteria, Escherichia coli O157:H7, methicillin-resistant Staphylococcus aureus (MRSA), vancomycin-resistant enterococci (VRE), and carbapenem-resistant Enterobacteriaceae (CRE). Many of the new media contain chromogenic or fluorogenic substrates that permit rapid detection of specific pathogens.The handbook’s format allows easy reference to information needed to prepare media for cultivating clinically relevant microorganisms. It also contains descriptions of expected results for organisms that are important for the examination of foods, water, and other