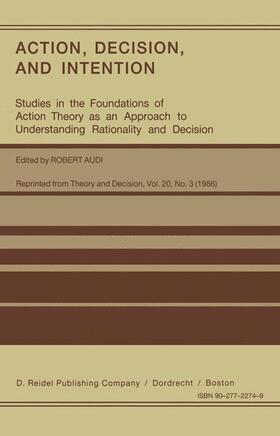 Studies in the Foundation of Action Theory as an Approach to Understanding Rationality and Decision
&lt;em&gt;Nachdrucked from THEORY AND DECISION, 20:3&lt;/em&gt; 1986
ISBN: 978-90-277-2274-4
Verlag: Springer Netherlands

Most of the papers in this collection are contributions to action theory intended to be of some relevance to one or another concern of decision theory, particularly to its application to concrete human behavior. Some of the papers touch only indirectly on problems of interest to decision theorists, but taken together they should be of use to both decision theorists and philosophers of action. Robert Audi's paper indicates how a number of questions in action theory might bear on problems in decision theory, and it suggests how some action-theoretic results may help in the construction or interpretation of theories of decision, both normative and empirical. Carl Ginet's essay lays foundations for the conception of action. His volitional framework roots actions internally and conceives them as irreducibly connected with intentionality. Hugh McCann's essay is also foundational, but stresses intention more than volition and lays some of the groundwork for assessing the rationality of intention and intentional action. In William Alston's paper, the notion of a plan as underlying (intentional) action is central, and we are given both a con­ ception of the structure of intentional action and a set of implicit goals and beliefs - those whose content is represented in the plan - which form an indispensable part of the basis on which the rationality of the action is to be judged.

Table of Content.- Action Theory as a Resource for Decision Theory.- Voluntary Exertion of the Body: A Volitional Account.- Intrinsic Intentionality.- An Action-Plan Interpretation of Purposive Explanations of Actions.- Formal Logic and Practical Reasoning.- Leading a Rational Life.- Announcements.