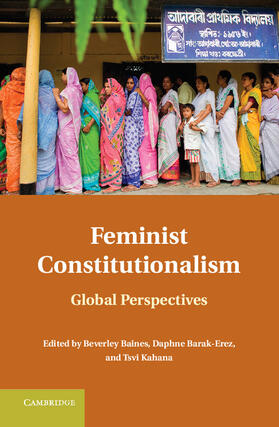 Constitutionalism affirms the idea that democracy should not lead to the violation of human rights or the oppression of minorities. This book aims to explore the relationship between constitutional law and feminism. The contributors offer a spectrum of approaches and the analysis is set across a wide range of topics, including both familiar ones like reproductive rights and marital status, and emerging issues such as a new societal approach to household labor and participation of women in constitutional discussions online. The book is divided into six parts: I) feminism as a challenge to constitutional theory; II) feminism and judging; III) feminism, democracy, and political participation; IV) the constitutionalism of reproductive rights; V) women's rights, multiculturalism, and diversity; and VI) women between secularism and religion.

Barak-Erez, Daphne
Daphne Barak-Erez is a Professor of Law at the Faculty of Law of Tel-Aviv University, where she holds the Stewart and Judy Colton Chair of Law and Security. She specializes in administrative law, constitutional law, comparative law and gender law. She is the recipient of several prizes, including the Rector's Prize for Excellence in Teaching (twice), the Zeltner Prize, the Woman of the City Award (by the City of Tel Aviv) and the Women in Law Award (by the Israeli Bar Association). She is the author and editor of three books, most recently, the author of Outlawed Pigs (2007) and the co-editor of Exploring Social Rights (2007), and has published more than seventy articles.

Baines, Beverley
Beverley Baines is a Professor of Law, Gender Studies, and Policy Studies at Queen's University. Since 2005, she has served as Head, Department of Gender Studies. Since co-editing The Gender of Constitutional Jurisprudence with Ruth Rubio-Marin (2004), she has authored papers on sex equality jurisprudence under the Canadian Charter of Rights and Freedoms; the implications of long-term care homes legislation for women; feminism and contextualism in the jurisprudence of former Supreme Court of Canada Justice Bertha Wilson; and the Charter conflicts posed for feminist sex equality proponents by religious freedom claimants in the contexts of polygamy (in Canada), faith-based family arbitrations (in Ontario) and multicultural accommodation (in Quebec).