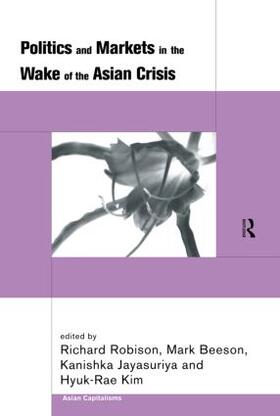 This book is a challenging volume by distinguished, leading scholars of East Asian political economy; it provides a distinct alternative to simplistic accounts of the Asian crisis which generally swing between an emphasis on convergence imposed by global economic forces, and the resurrection of the special patterns of East Asian economic governance. The authors argue that global forces and domestic structures are engendering new forms of economic and political regulation in East Asia. While these signal the death knell of the developmental state, this in itself does not presuppose a convergence towards a standard model of global capitalism. The arguments in this book will contribute significantly to the construction of a new research agenda for comparative political economy at the dawn of a new century.Politics and Markets in the Wake of the Asian Crisis covers a range of East Asian countries including the People's Republic of China, South Korea, Indonesia, Thailand and Malaysia. All the studies are linked together by a common endeavour to explore the dynamic interaction between global economic forces and domestic structures. The book is at the cutting edge of the study of East Asian political economy, and is distinguished by the attention it pays to the regional and international context of the crisis. It also contains theoretically sophisticated analyses of organisations such as APEC and the IMF.