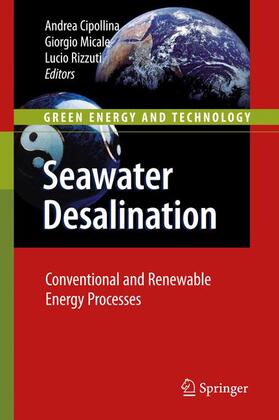 The first section of this book presents, in a technical but reader-friendly way, an overview of currently-used desalination processes, from thermal to membrane processes, highlighting the relevant technical features, advantages and disadvantages, and development potential. It also gives a rapid insight into the economic aspects of fresh water production from seawater.

The second section of the book presents novel processes which use Renewable Energies for fresh water production. From the first solar still evaporators, which artificially reproduced the natural cycle of water, technology has progressed to develop complex systems to harness energy from the sun, wind, tides, waves, etc. and then to use this energy to power conventional or novel desalination processes. Most of these processes are still at a preliminary stage of development, but some are already being cited as examples in remote areas, where they are proving to be valuable in solving the problems of water scarcity.

A rapid growth in these technologies is foreseen in the coming years. This book provides a unique foundation, within the context of present and future sustainability, for professionals, technicians, managers, and private and public institutions operating in the area of fresh water supply.