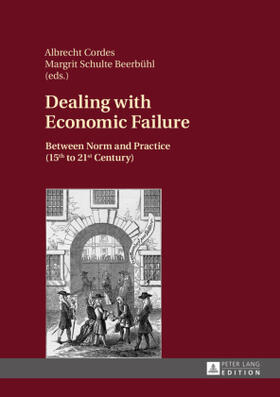 Between Norm and Practice (15th to 21st Century)

Dealing with economic failure is one of the persistent and ubiquitous features of economic life. This volume brings together international scholars from several academic disciplines – economic and social history, legal history and law. They address a variety of different aspects on economic failure ranging from case studies on bankruptcy, insolvency, speculation, and strategies of coping with economic and financial squeezes. One focus throughout the book is on the in-betweens and the reciprocal impact of law and practice. The timeframe covers the period from the late middle ages to the present day. Irrespective of the temporal, spatial or cultural differences a slow and tedious evolution from a creditor-friendly to a more debtor-friendly perspective can be perceived. The chances for a fresh start have slightly improved.

Contents: Mechthild Isenmann: Before Bankruptcy: Conflict Solution Strategies of Upper German Trading Companies in the Fifteenth and "Long" Sixteenth Centuries - Wolfgang Forster: Failed Memoria: Rights of Patronage and of Burial in Bankruptcy - Dave De ruysscher: The Struggle for Voluntary Bankruptcy and Debt Adjustment in Antwerp ( c. 1520- c. 1550) - Klas Nyberg/Håkan Jakobsson: Negotiations, credit and trust in Northern Europe: institutional efficiency in the handling of bankruptcies in late eighteenth-century Stockholm - Magnus Ressel: Norms and Practice of Handling Complex and International Insolvencies in Early Modern Venice - Viera Rebolledo-Dhuin: Below and Beyond Bankruptcy: Credit in the Parisian Book Trade in the Nineteenth-Century - Erika Vause: The Ties that Bind?: An Analysis of the Debt Imprisonment Records in Lyon 1835-1840 - Jasper Kunstreich: Bankruptcy Laws as Standortpolitik - the Case of Hamburg 1850 to 1870 - Ulrich Falk/Christoph Kling: The Regulatory Concept of Compulsory Composition in the German Bankruptcy Act - Peter von Wilmowsky: Insolvency Law: Its Roles and Principles.

Cordes, Albrecht
Albrecht Cordes is professor for medieval and early modern legal history and for private law at the Goethe-University Frankfurt a. M. He has specialized in pre-modern history of commercial law and on the legal history of the Hanseatic league.
Margrit Schulte Beerbühl is professor in history at the university of Düsseldorf. She has specialized on migration from Germany to Britain and early modern transnational merchant networks.