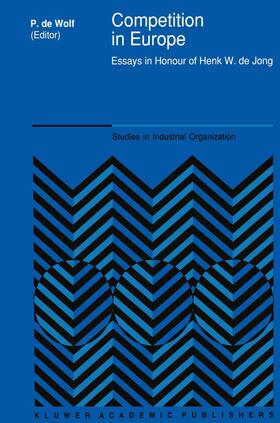 Competition in Europe, which has been chosen as the title for the Essays in Honour of Henk W. de Jong, contains two key concepts, that characterize his scientific contribution to Industrial Organisation. Professor H.W. de Jong is in the first place an economist who is highly inspired by the dynamics of markets in general and the dynamics and conditions of compe­ tition in particular. In the second place, H.W. de Jong is a real European economist, not in the sense that his theoretical insights are limited to Europe, but in the sense that his ideas and policy suggestions - especially those concerning competition policy - reflect his sincere involvement in the European inte­ gration process and the economic conditions and perspectives of a Common Market for the European Community. In his many illustrations of the evolution of markets and the performance of enterprises in different business environments, H.W. de Jong also demonstrates his knowledge of historical and political aspects of different economies in Europe, often in comparison with the United States and Japan.

1. Introduction - Growth without Bending.- 2. Some Aspects of Dynamic Analysis and Industrial Change.- 3. Modeling Economic Change and Restructuring- The Micro Foundations of Economic Expansion.- 4. Growth of Large Enterprises and their Market Environments.- 5. Industrial and Market Concentration in Europe.- 6. Efficacy and Freedom of Mergers and Acquisitions.- 7. The Contribution of Economists to the Origins of UK Competition Policy.- 8. Public Ownership versus Privatisation.- 9. Sociopolitical Competition or Harmonization in the European Community? Some Fundamental Reflections.- 10. Cooperation in Research & Development and European Competition Policy.- 11. Antitrust Treatment of Cooperative Research: How Reasonable is the Rule of Reason?.- 12. Competition and Combination in the European Market Economy.- Contributors.