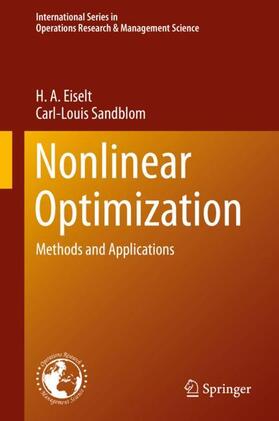 This book provides a comprehensive introduction to nonlinear programming, featuring a broad range of applications and solution methods in the field of continuous optimization. It begins with a summary of classical results on unconstrained optimization, followed by a wealth of applications from a diverse mix of fields, e.g. location analysis, traffic planning, and water quality management, to name but a few. In turn, the book presents a formal description of optimality conditions, followed by an in-depth discussion of the main solution techniques. Each method is formally described, and then fully solved using a numerical example.

Eiselt, H. A.
H. A. Eiselt is a Professor in the Faculty of Business Administration at the University of New Brunswick, Canada. After working for eight years at Concordia University in Montreal, he joined the Faculty of Business Administration in Fredericton, New Brunswick, in 1986. He teaches Quantitative Analysis and Location Theory in the BBA program. Dr. Eiselt received the UNB Merit Award in 1991 and 2016. He received the Faculty of Business Administration's Excellence in Research Award in 1998, 2003, and 2015 for outstanding performance across his career. He is Associate Editor of INFOR, and a member of the Advisory or Editorial Boards of Computers & Operations Research, and the International Journal of Operations, Quantitative Management. He has published 115 articles in scientific journals as well as 12 books, 9 of which with Springer.
Carl-Louis Sandblom is Professor Emeritus in the Department of Industrial Engineering at Dalhousie University in Halifax, Canada, an institution where he has been since 1985. Prior to that, Dr. Sandblom taught at Concordia University in Montreal and at the University of Birmingham in the UK where he earned his PhD. He has published about 50 articles in scientific journals as well as 8 books.