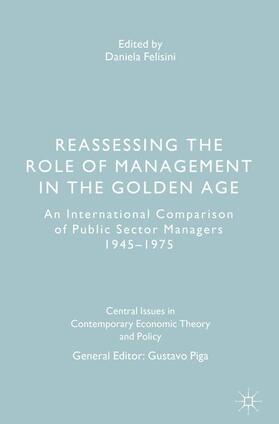 Felisini Reassessing the Role of Management in the Golden Age

Felisini Reassessing the Role of Management in the Golden Age

This book provides a critical reassessment of the role of the public sector during the Golden Age in both advanced and emerging economies. Contributions focus on a major player in the setting of mixed economies: the top managers of state-owned enterprises. Bringing together world-renowned scholars, this collection analyzes the actions of these managers and their contribution to the rise and fall of the mixed economy during the Golden Age, opening up a comparative perspective of the topic. The book forces readers to reconsider how crucial state-owned enterprises were for economic recovery and for the modernization of the production apparatus of many countries in Western Europe, India, Latin America and South Africa. Key chapters discuss state-owned enterprises in twentieth-century Europe, the managerial revolution in Italy, the role of the state in Argentine industrialization, and the organization of capital in the Indian economy. This insightful collection will appeal to scholars and students with an interest in economic history and the socio-economic impact of state-owned companies around the globe.

Felisini, Daniela
Daniela Felisini is Professor of Economic History at the University of Rome “Tor Vergata”, Italy, where she holds the Jean Monnet Chair. She has published books and articles on the history of state-owned enterprises and on Italian economic ruling classes.