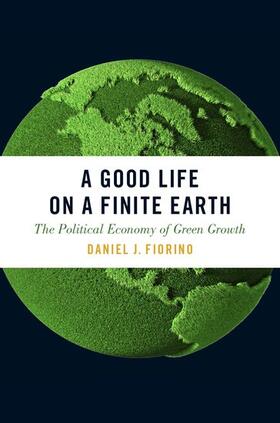 Fiorino A Good Life on a Finite Earth: The Political Economy of Green Growth

Bücher versandkostenfrei
kostenlose Rücksendung
The potential conflict among economic and ecological goals has formed the central fault line of environmental politics in the United States and most other countries since the 1970s. The accepted view is that efforts to protect the environment will detract from economic growth, jobs, and global competitiveness. Conversely, much advocacy on behalf of the environment focuses on the need to control growth and avoid its more damaging effects. This offers a stark choice
between prosperity and growth, on the one hand, and ecological degradation on the other. Stopping or reversing growth in most countries is unrealistic, economically risky, politically difficult, and is likely to harm the very groups that should be protected. At the same time, a strategy of unguided
"growth above all" would cause ecological catastrophe.

Over the last decade, the concept of green growth — the idea that the right mix of policies, investments, and technologies will lead to beneficial growth within ecological limits — has become central to global and national debates and policy due to the financial crisis and climate change. As Daniel J. Fiorino argues, in order for green growth to occur, ecological goals must be incorporated into the structure of the economic and political systems. In this book, he looks at green growth, a vast
topic that has heretofore not been systematically covered in the literature on environmental policy and politics. Fiorino looks at its role in global, national, and local policy making; its relationship to sustainable development; controversies surrounding it (both from the left and right); its
potential role in ameliorating inequality; and the policy strategies that are linked with it. The book also examines the political feasibility of green growth as a policy framework. While he focuses on the United States, Fiorino will draw comparisons to green growth policy in other countries, including Germany, China, and Brazil.