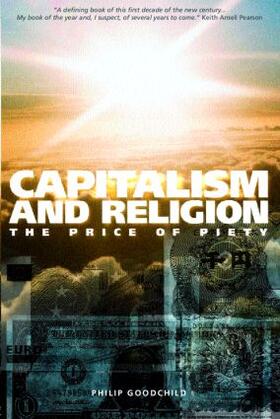 The Price of Piety

Our global ecological crisis demands that we question the rationality of the culture that has caused it: western modernity's free market capitalism. Philip Goodchild develops arguments from Nietzsche, Adorno, Horkheimer, and Marx, to suggest that our love of Western modernity is an expression of a piety in which capitalism becomes a global religion, in practice, if not always in belief. This book presents a philosophical alternative that demands attention from philosophers, critical theorists, philosophers of religion, theologians, and those in ecological politics.

Goodchild, Philip
Philip Goodchild lectures in Religious Studies at the University of Nottingham. He is the author of Gilles Deleuze and the Question of Philosophy (Fairleigh Dickinson University Press, 1996) and of Deleuze and Guattari (Sage, 1996) and is presently editing two other forthcoming volumes on philosophy and religion.