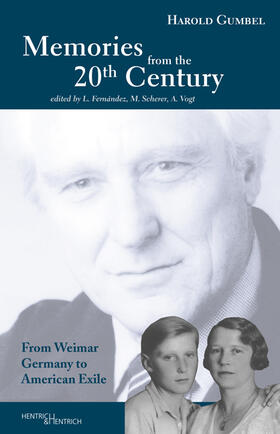 From Weimar Germany to American Exile

These “Memories from the 20th century” are a unique document, an autobiographical collection of chapters of the life of a young German emigre who escaped with his parents to the USA. Being the adopted son of the later famous mathematician and political activist Emil Julius Gumbel (1891–1966), married to Marie Louise von Czettritz, the author describes the circumstances of their life, first in Heidelberg, where the family was attacked by Nazis already before 1933, their life in France during the first exile, the dramatic way out in 1940, and their settlement in the USA. The memoirs of the end of the Weimar Republic and the years in exile are written from the perspective of a growing boy aged 12 to 20. In the second part, the author describes his way in the USA, his study, his professional career as an engineer, and his own family life.

Gumbel, Harold
Harald Solscher (Harold Gumbel, 1921 Hamburg - 2016 California) was the younger son of Marie Louise Czettritz (1892–1952) and her first husband. In the 1920s, his mother joined the German League for Human Rights, where she met Emil Julius Gumbel (1891–1966). In 1930 they married and Harold was adopted. Because of the Nazi’s the family had to go into exile, Harold finished school in France, studied engineering in the USA, and became an American citizen who worked successfully in the US aircraft industry.