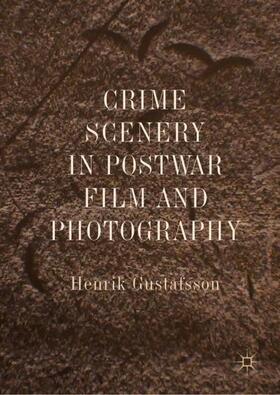 This book offers a rare and innovative consideration of an enduring tendency in postwar art to explore places devoid of human agents in the wake of violent encounters. To see the scenery together with the crime elicits a double interrogation, not merely of a physical site but also of its formation as an aesthetic artefact, and ultimately of our own acts of looking and imagining. Closely engaging with a vast array of works made by artists, filmmakers and photographers, each who has forged a distinct vantage point on the aftermath of crime and conflict, the study selectively maps the afterlife of landscape in search of the political and ethical agency of the image. By way of a thoroughly interdisciplinary approach, Crime Scenery in Postwar Film and Photography brings landscape studies into close dialogue with contemporary theory by paying sustained attention to how the gesture of retracing past events facilitates new configurations of the present and future.

Gustafsson, Henrik
Henrik Gustafsson is Professor of Film, Media and Visual Culture in the Department of Media and Documentation Science, University of Tromsø, Norway. His articles appear in numerous anthologies and journals, and he is the author or editor of four books, including Cinema and Agamben: Ethics, Biopolitics and the Moving Image (co-edited with Asbjørn Grønstad, 2014) and Out of Site: Landscape and Cultural Reflexivity in New Hollywood Cinema, 1969-1974 (2008).