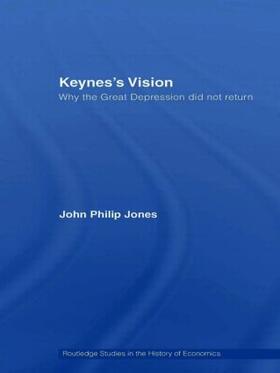 Why the Great Depression did not Return

John Maynard Keynes was the most influential economist of the 20th Century, whose doctrines had a huge impact on American prosperity in the years following the Second World War. This new book by John Philip Jones describes the main features of Keynes's work, including the fiscal and monetary policies he recommended, together with a detailed tracking of how his theories played out in the American economy.
The book focuses on each individual aspect of Keynes's doctrines: his revolutionary emphasis on the economy as a whole (the study that would later become known as macroeconomics); consumer demand and where it leads; investment demand and where it leads; the rate of interest and the influence of monetary policy; the role of government in controlling fiscal policy; and the overarching importance of expectations, optimism and pessimism. The book concludes with the seven major lessons drawn from the American economy in the latter half of the 20th Century and how these lessons were forecast by Keynes.
An excellent introduction to Keynes and his legacy for students and non-specialist members of the public who want to know more about how the economy is controlled and stimulated, it is also of considerable interest to students of modern economic history.