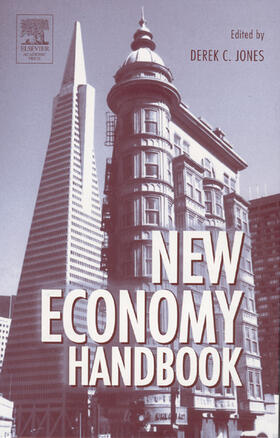 The New Economy Handbook will primarily serve reference users in business schools, economics departments, public and university libraries, special libraries, and institutions/agencies concerned with finance, trade, e-commerce, banking, and other regulatory, trade, and commercial activities. Secondary users will be business professionals and managers, as well as entrepreneurs, bankers, and others who need traditional economic information and data about new technology firms. Because of the scope of its table of contents, the book might well be used as a supplement to many courses.

The revolutions that brought about the New Economy are quietly embedded in familiar, old products, not necessarily ringing, beeping, and vibrating next to our skins. Why is the bulky, battery-operated e-book the new economy, while Lockheed-Martin's swooping F-16 is consigned to the Old Economy?

The information technology boom of the 1990s stoked a New Economy characterized by surging output per worker but with hard-to-measure and vulnerable underpinnings. Faster productivity is, of course, the key to higher living standards. The most important aspect of the New Economy might not, therefore, be the shift to high-tech industries, but the way that Information Technology improves the efficiency of all parts of the economy.

This collection of original essays offers the first thorough investigation of the New Economy. Its poignancy is even more apparent in the wake of the 1990s technology bubble. Articles share a format that encourages accessibilty, including an outline, glossary, and summary, and an extensive index adds utility. Written for students and scholars seeking authoritative data and perspectives.