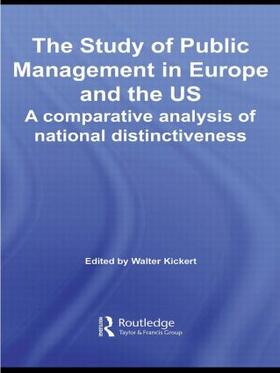 Kickert The Study of Public Management in Europe and the US

A Competitive Analysis of National Distinctiveness

Kickert The Study of Public Management in Europe and the US

This book presents an overview of the scientific study of public management, gathering together some of the most authoritative experts in this area of study in Europe and the United States, writing specifically about their respective countries. These essays seek to present the national distinctiveness of the study of public management, in the context of specific state administration.

This bookgoes further than some previous books concerning public management by highlighting the underlying differences betweenEurope and the United States and amongstEuropean countries, in relation to their particular political-administrative circumstances. The aim of this book is to establish a dialogue between Anglo-American and European approaches to public management, to encourage readers to see their own national ideas and practises in contrast to others and foster leaning by asking repeatedly ‘compared to what?’