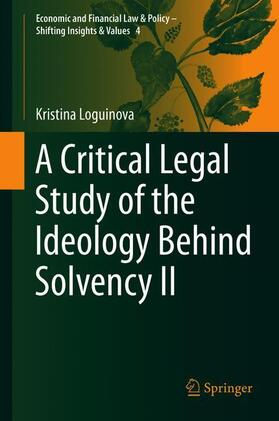 Loguinova A Critical Legal Study of the Ideology Behind Solvency II

Loguinova A Critical Legal Study of the Ideology Behind Solvency II

This book analyzes the impact of Solvency II. In recent years, EU legislators have sought to introduce fundamental reforms. Whether these reforms were indeed fundamental is critically investigated with regard to a post-crisis piece of financial legislation affecting the EU’s largest institutional investors: Solvency II. Namely, the last financial and economic crisis, the worst financial catastrophe of the last decade, revealed that financial law in particular was not sufficiently mature to maintain the existence of a robust and trust-worthy financial system that could protect society from economic decline. The work also makes concrete recommendations on achieving a more sustainable future. As such, it offers a valuable resource for anyone who is interested in the financial system, the EU political economy, insurance, sustainability, and Critical Legal Studies.

General introduction.- Part I Being a broadly informed generalizer - the research ontology: Introduction to part I.- The research approach: CLS.- The research method: Law reform design.- Self-criticism.- Concluding summary of part I with a schematic representative structure of chaotic reality.- Part II Being a specialized investigator and law reform designer - the political economy of Solvency II: Introduction to part II.- A prelude to Solvency II.- Ideology of the form: Solvency II versus Solvency I and Basel II.- Ideology of substance: Solvency II versus Solvency I and Basel II.- Concluding summary of part II.- General conclusion.