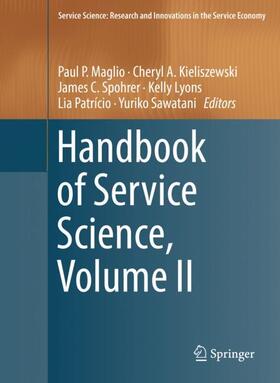 The second volume of this successful handbook represents varied perspectives on the fast-expanding field of Service Science. The novel work collected in these chapters is drawn from both new researchers who have grown-up with Service Science, as well as established researchers who are adapting their frames for the modern service context.

The first Handbook of Service Science marked the emergence of Service Science when disciplinary studies of business-to-customer service systems intertwined to meet the needs of a new era of business-to-business and global service ecosystems. Today, the evolving discipline of Service Science involves advanced technologies, such as smartphones, cloud, social platforms, big data analytics, and artificial intelligence. These technologies are reshaping the service landscape, transforming both business models and public policy, ranging from retail and hospitality to transportation and communications. By looking through the eyes of today’s new Service Scientists, it is anticipated that value and grand challenges will emerge from the integration of theories, methods, and techniques brought together in the first volume, but which are now rooted more deeply in service-dominant logic and systems thinking in this second volume.

The handbook is divided into four parts: 1) Service Experience--On the Human-centered Nature of Service; 2) Service Systems–On the Nature of Service Interactions; 3) Service Ecosystems–On the Broad Context of Service; 4) Challenges–On Rethinking the Theory and Foundations of Service Science. The chapters add clarity on how to identify, enable, and measure service, thus allowing for new ideas and connections made to physics, design, computer science, and data science and analytics for advancing service innovation and the welfare of society.

Handbook of Service Science, Volume II offers a thorough reference suitable for a wide-reaching audience including researchers, practitioners, managers, and students who aspire to learn about or to create a deeper scientific foundation for service design and engineering, service experience and marketing, and service management and innovation.

1 Introduction: Why Another Handbook?.- 2 Service Timing: Designing and Executing Service in a Dynamic Environment.- 3 Designing Service Systems to Enhance Perceived Decision Control.- 4 The Sequence of Service: An Affect Perspective to Service Scheduling.- 5 Customer Adoption of AI in Service Encounters.- 6 Optimal Structure of Experiential Services: Review and Extensions.- 7 A Human-centered, Multidisciplinary, and Transformative Approach to Service Science: A Service Design Perspective.- 8 Emerging Design Research Themes: A Research Review from Design, Service, and Management Studies.- 9 High-tech vs. High Touch Service Design in Healthcare: A Case for Considering the Emotional Biorhythm of the Patient in Technology Interventions.- 10 Customer Experience Analytics: Dynamic Customer-Centric Model.- 11 The Future of Service Systems: From Synergetics to Multi-Sided Platforms.- 12 Using Employees' Collective Intelligence for Service Innovation: Theory and Instruments.- 13 A Multilayer Framework for Service System Analysis.- 14 People and Social Interaction: Drivers of Service Innovation.- 15 Queues in Service Systems: Some Unusual Applications.- 16 Clarifying the Concept of Smart Service Systems.- 17 Exploring the Journey to Services.- 18 Digital Workers in Nested, Networked Holistic Service Systems: A New Workplace Culture from a Service Science Perspective.- 19 Visualizing and Improving Service Processes with PCN Analysis.- 20 Value-in-Context: An Exploration of the Context of Value and the Value of Context.- 21 On the Evolution of Service Ecosystems: A Study of the Emerging API Economy.- 22 Institutionalization Process of Service Innovation: Overcoming Competing Institutional Logics in Service Ecosystems.- 23 Innovation in Sociomaterial Practices. The Case of IoE in The Healthcare Ecosystem.- 24 Toward the Service Science of Education.- 25 Leveraging Big Data Platform Technologies and Analytics to Enhance Smart City Mobility Services.- 26 Population Health as a Network of Services: Integration of Health, Education, and Social Services.- 27 Incremental and Radical Service Innovation in Healthcare.- 28 Further Advancing Service Science with Service-Dominant Logic: Service Ecosystems, Institutions, and their Implications for Innovation.- 29 On the Ethical Implications of Big Data in Service Systems.- 30 Service-Dominant Logic: Inward and Outward Views.- 31 Service Economies and Complexity.- 32 A Perspective on the Field of Service Science.- 33 Embedding Humans into Service Systems Analysis: The Evolution of Mathematical Thinking about Services.- 34 The Demolition of Service Scientists' Cultural-boundaries.- 35 Capturing Value in the Service Economy.- 36 Service as Intersubjective Struggle.

Maglio, Paul P.
Paul P. Maglio is a professor of technology management in the School of Engineering at the University of California, Merced. He holds an SB in computer science and engineering from MIT and a PhD in cognitive science from UCSD. One of the founders of the field of service science, Dr. Maglio is currently Editor-in-Chief of INFORMS Service Science, and was lead editor of the Handbook of Service Science (Springer).
Cheryl Kieliszewski is a Research Staff Member at IBM Research - Almaden. She has extensive research and applied human factors engineering experience investigating human behavior and expectations, and the implication of these on technology and service design. Her research focuses on understanding the impact of team practices on technological and organizational design to inform the human-system relationship definition within service systems. Cheryl received her Ph.D. from Virginia Tech in Industrial and Systems Engineering for Human Factors. Her professional accomplishments include several issued patents, published papers, speaker, and serving as a co-editor of the inaugural "Handbook of Service Science".

Kelly Lyons is an Associate Professor and Associate Dean, Academic in the Faculty of Information at the University of Toronto. Prior to joining the Faculty of Information, she was the Program Director of the IBM Toronto Lab Centre for Advanced Studies (CAS). Her current research interests include service science, knowledge mobilization, social media, and collaborative work. Currently, she is focusing on ways in which social media can support human-to- human interactions in service systems and data-driven knowledge mobilization. Kelly holds a cross- appointment with the University of Toronto's Department of Computer Science and is an IBM Faculty Fellow.