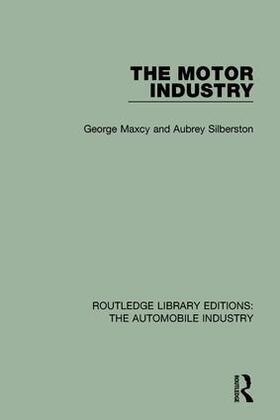 Originally published in 1959, this book was one of the first to give a comprehensive view of the motor industry from an economic standpoint. Although the book concentrates on the UK motor industry, many references are made to that of the USA and other leading automobile manufacturers. Among the subjects discussed are the structure of the British motor industry, the demand for vehicles, the structure of costs, economies of large-scale production, the nature of competition and profits and sources of funds.

1. Historical Introduction 2. Structure of the Industry 3. The Demand for Vehicles 4. Technique of Production 5. The Structure of Costs 6. Economies of Large-scale Production 7. Competition of the Car Market, 1929-1956 8. The Nature of Competition in the Car Industry 9. Profits and Sources of Funds 10. Future Prospects 11. Conclusions. Appendix A: The Capital-Output Ration in the Motor Industry Appendix B: Comparative Productivity and Prices int he British and American Motor Industries Appendix C: The Relative Prices of British and Continental Cars Appendix D: Statistical Tables