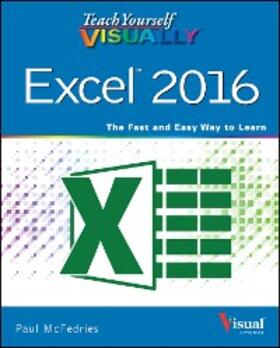 See your way to Excel spreadsheet stardom with this visual guide
If you're always hearing about the cool things Excel can do, here's your chance to see how to do them!Teach Yourself Visually Excel offers you a straightforward visual approach to working with the newest version of the world's leading spreadsheet program. Packed with visually rich tutorials and step-by-step instructions that will help you take your Excel skills to new heights, this friendly and approachable guide will have you creating, editing, and manipulating Excel spreadsheets in no time!
Excel can seem daunting, but with Teach Yourself Visually Excel, you'll quickly and painlessly learn how to perform dozens of tasks, including creating spreadsheets and charts, filtering and sorting data, working with PivotTables, and so much more. Covering the latest additions and changes to the newest version of Excel, a series of easy-to-follow, full-color tutorials helps you to excel at working with Excel!
* Tutorials and step-by-step screenshots make lessons easy to follow and understand
* Helps you grasp the basic functions of Excel--and beyond
* Walks you through Excel s new features
* Clearly demonstrates how to organize, present, analyze, and chart data with Excel
Whether you've never used Excel or just need to brush up on its new features, Teach Yourself Visually Excel will be the dog-eared resource you'll turn to again and again.

McFedries, Paul
Paul McFedries (Toronto, Ontario) is the president of Logophilia Limited, a technical writing company. He has been programming since he was a teenager in the mid-1970s, has programmed everything from mainframes to desktops to bar code scanners, and has worked with many different languages, including Fortran, assembly language, C++, and, of course, JavaScript. Paul has written more than four dozen books that have sold more than two million copies worldwide. These books include Windows 8.1 Simplified, Teach Yourself VISUALLY Windows 8.1, Excel Data Analysis Visual Blueprint, and previous editions of Teach Yourself VISUALLY Excel. Paul encourages all readers to drop by his Web site, mcfedries.com.