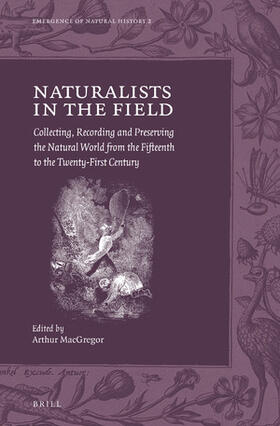 Naturalists in the Field: Collecting, Recording and Preserving the Natural World from the Fifteenth to the Twenty-First Century

Naturalists in the Field: Collecting, Recording and Preserving the Natural World from the Fifteenth to the Twenty-First Century

Interposed between the natural world in all its diversity and the edited form in which we encounter it in literature, imagery and the museum, lie the multiple practices of the naturalists in selecting, recording and preserving the specimens from which our world view is to be reconstituted. The factors that weigh at every stage are here dissected, analysed and set within a historical narrative that spans more than five centuries. During that era, every aspect evolved and changed, as engagement with nature moved from a speculative pursuit heavily influenced by classical scholarship to a systematic science, drawing on advanced theory and technology. Far from being neutrally objective, the process of representing nature is shown as fraught with constraint and compromise.

With a Foreword by Sir David Attenborough

2 New World and Other Exotic Animals in the Italian Renaissance: the Menageries of Lorenzo Il Magnifico and His Son, Pope Leo X

3 The Emperor’s Exotic and New World Animals: Hans Khevenhüller and Habsburg Menageries in Vienna and Prague

7 Into the Wild: Botanical Fieldwork in the Sixteenth Century

8 “Take with you a small Spudd or Trowell”: James Petiver’s Directions for Collecting Natural Curiosities

9 Linnaean Scholars Out of Doors: So Much to Name, Learn and Profit From

10 “Devilish fellows who test patience to the very limit”: Naturalists in the Pacific in the Age of Cook

12 The Hudson’s Bay Company and Its Collectors

13 European Enlightenment in India: an Episode of Anglo-German Collaboration in the Natural Sciences on the Coromandel Coast, Late 1700s–Early 1800s

14 Eight Ways to Catch a Seal: Fieldwork in Siberia in the Age of Enlightenment

15 Face to Face with Nain Singh: the Schlagintweit Collections and Their Uses

16 More Than One Way to Skin a Wombat: the How and Why of Collecting in the South Seas

19 From Tubs to Flying Boats: Episodes in Transporting Living Plants

21 Gathering Spirals: on the Naturalist and Shell Collector Hugh Cuming

22 Bat-Fowlers, Pooters and Cyanide Jars: a Historical Overview of Insect Collecting and Preservation

29 Virtual Collecting: Camera-Trapping and the Assembly of Population Data in Twenty-First-Century Biology

30 The Psychology of Finding and Recognizing Wildlife

Appendix: Key Texts in the History of Field Collecting

MacGregor, Arthur
Arthur MacGregor, D.Litt (1999), formerly a curator at the Ashmolean Museum, Oxford. He has published Curiosity and Enlightenment (2007), Animal Encounters (2012) and has edited some 13 other books and c.130 articles. He is editor of the Journal of the History of Collections (OUP).