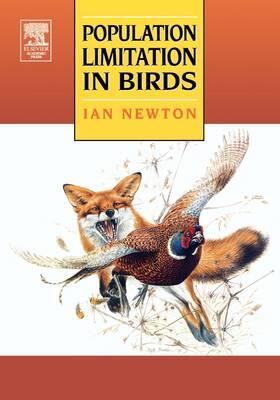 This book meets the demand for a comprehensive introduction to understanding the processes of population limitation. Recognized world-wide as a respected biologist and communicator, Dr. Ian Newton has now written a clear and detailed treatise on local scale population limiting factors in birds. It is based almost entirely on results from field studies, though it is set in a contemporary theoretical framework. The 16 chapters fall under three major section headings: Behavior and Density Regulation; Natural Limiting Factors; and Human Impacts. Population Limitation in Birds serves as a needed resource expanding on Dr. David Lacks research in this area of ornithology in the 1950s. It includes numerous line diagrams and beautiful illustrations by acclaimed wildlife artist Keith Brockie.

Newton, Ian
Dr. Ian Newton is respected world-wide both as a biologist with a special interest and expertise in this subject and as a communicator. He is a seasoned and popular keynote speaker at National and International meetings, and his talks are often the high point of conferences. Ian Newton was born and raised in north Derbyshire. He attended Chesterfield Boys Grammar School, followed by the universities of Bristol and Oxford. He has been interested in birds since boyhood, and as a teenager developed a particular fascination with finches, which later led to doctoral and post-doctoral studies on these birds. Later in life he became known for his penetrating field studies of bird populations, notably on raptors. He is now a senior ecologist with the Natural Environment Research Council and visiting professor of ornithology at the University of Oxford.