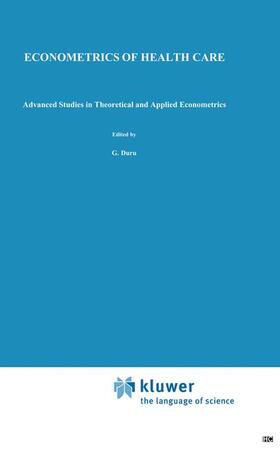 Econometrics of Health Care - which we have sometimes called 'medico­ metrics' - is a field in full expansion. The reasons are numerous: our knowl­ edge of quantitative relations in the field of health econometrics is far from being perfect, a large number of analytical difficulties - combining medical (latent factors, e. g. ) and economic facts (spatial behaviour, e. g. ) are faced by the research worker, medical and pharmaceutical techniques change rapidly, medical costs rocket more than proportionally with available resources, of being tightened. medical budgets are in the process So it is not surprising that the practice of 'hygieconometrics' - to produce a neologism - is more and more included in the programmes of econometri­ cians. The Applied Econometrics Association has devoted to the topic two symposia in less than three years (Lyons, February 1983; Rotterdam, December 1985), without experiencing any difficulties in getting valuable papers: on econometrics of risks and medical insurance, on the measurement of health status and of efficiency of medical techniques, on general models allowing simulation. These were the themes for the second meeting, but other aspects of medical-economic problems had presented themselves already to the analyst: medical decision making and its consequences, the behaviour of the actors - patients and physicians -, regional medicometrics and what not: some of them have been covered by the first meeting. Finally, in July 1988 took place in Lyons the Fourth International Conference on System Science in Health Care; it should not be astonishing.

Introduction: the health system in the general economy.- Health expenditure growth and macroeconomic models.- one: supply and demand.- The MIMIC health status index.- Estimating demand for medical care: health as a critical factor for adults and children.- An empirical model of the demand for health care in Belgium.- Reconciling spatial demand/supply imbalances in acute care.- Physicians' specialty choice and specialty income.- two: functioning: cost and financing.- Subsidies, quality, and regulation in the U.S. nursing home industry.- A Poisson process of which the parameter contains a non-stationary error: application to the analysis of a series of deaths in a large hospital.- The construction of a model for medical cost and labour (MEDIKA).- The microeconomics and econometrics of bonus systems in health insurance.- Microsimulation of the costs of the health system in the Federal Republic of Germany.- three: synthesis.- Segmentation and classification. An application to patients' risk estimation.- A general equilibrium model of health care.