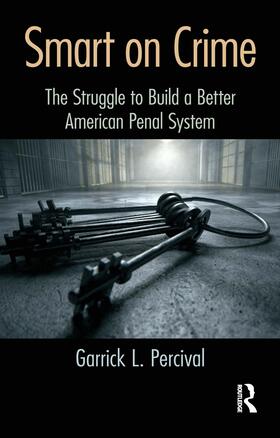 The Struggle to Build a Better American Penal System

The most punitive era in American history reached its apex in the 1990s, but the trend has reversed in recent years. Smart on Crime: The Struggle to Build a Better American Penal System examines the factors causing this dramatic turnaround. It relates and echoes the increasing need and desire on the part of actors in the American government system to construct a penal system that is more rational and humane.
Author Garrick L. Percival points out that the prison boom did not naturally emerge as a governmental response to increasing crime rates. Instead, political forces actively built and shaped the growth of a more aggressive and populated penal system. He is optimistic that the shifting political forces surrounding crime and punishment can now reform the system, explaining how current political actors can craft more constructive and just policies and programs. The book shows how rationality and humanitarianism lead to a penal system that imprisons fewer people, does less harm to the lives of individual offenders and those close to them, and is less expensive to maintain.
The book presents empirical data to concretely demonstrate what is working and what is not in today’s penal system. It closely examines policies and practices in Texas, Ohio, and California as comparative illustrations on what progress has been made or needs to be made in penal systems across the United States. The book includes a comprehensive discussion of highlighted issues, and relates more than two dozen interviews with pivotal political actors who clarify why there is a major shift underway in the American penal system. Their insights reveal paths that can be taken to improve the current penal system.

Percival, Garrick L.
Garrick Percival is an assistant professor of political science and director of the Institute for Public Affairs and Civic Engagement at San José State University. His work focuses on American politics, primarily the nexus between crime policy, racial politics, and inequality at the state and local levels of government. His work has appeared in State Politics and Policy Quarterly, Social Science Quarterly, Political Research Quarterly, Journal of Public Administration Research and Theory, and Policy Studies Journal, among other outlets. He teaches courses at San José State University in state and local government, public policy, and American politics. He earned his B.A. and M.A. degrees from San Diego State University and his Ph.D. in political science from the University of California, Riverside.