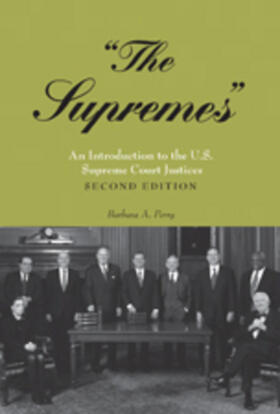 An Introduction to the U.S. Supreme Court Justices

This second edition of 'The Supremes' introduces readers to the Supreme Court’s newest members, Chief Justice John Roberts and Justice Samuel Alito, with vivid biographical sketches and riveting accounts of how they successfully navigated the politics inherent in judicial appointments. Compelling portraits of all nine justices are completely updated, with clear explanations of their votes and opinions in landmark cases involving free speech, religion, capital punishment, gun control, affirmative action, privacy, abortion, and terrorism. Never has the Supreme Court’s story been so lively or so relevant!

Perry, Barbara A.
The Author: Barbara A. Perry is Carter Glass Professor of Government and founding director of the Center for Civic Renewal at Sweet Briar College in Virginia. She was the 1995 Tom C. Clark fellow at the U.S. Supreme Court. In addition to numerous articles in professional journals, Perry is the author of eight books, including The Priestly Tribe: The Supreme Court's Image in the American Mind; A «Representative» Supreme Court: The Impact of Religion, Race, and Gender in Supreme Court Appointments; and, with Henry J. Abraham, Freedom and the Court: Civil Rights and Liberties in the United States.