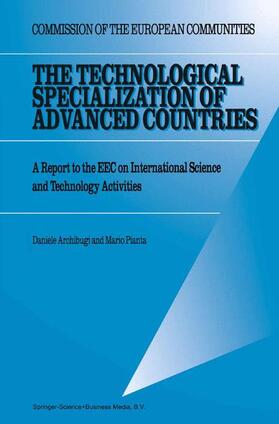 A Report to the EEC on International Science and Technology Activities

Advanced countries have shown an increasing convergence in their economic performance and technological intensity, with a relative decline of the position of the United States and the emergence of the European and Japanese economies. The Technological Specialization of Advanced Countries moves beyond aggregate patterns and examines the sectoral structure of technological activities, the process of specialization, and the impact on national performance.
Indicators of technology and of scientific activity are examined together with other economic and R & D data, providing a wealth of empirical evidence on the activities, and areas of strength and weakness of individual countries. The amount of disaggregated data provided, and the assessment offered on the state of art in science and technology indicators, make The Technological Specialization of Advanced Countries an important reference work.
A description of the fields of national effort is provided and a special study is devoted to the fields of greater innovative dynamism where patenting has grown most rapidly. Over time, countries have concentrated their technological efforts in the fields of their greater strength, under the pressure of increasing international competition and the proprietary nature of know how. Conversely, in science there has generally been a decrease in the degree of specialization, with countries entering new fields of research, taking advantage of the open flow of scientific knowledge.
For science and technology policy, the findings of The Technological Specialization of Advanced Countries suggest that national efforts should be combined with the growing international integration. The aims of maintaining established areas of strength and of developing new specializations in emerging fields should be balanced, and a more selective policy at the sectoral level is suggested.