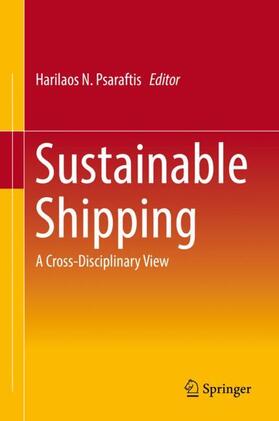 International shipping is currently at a crossroads. The decision of the International Maritime Organization (IMO) in April 2018 to adopt an Initial Strategy so as to achieve by 2050 a reduction of at least 50% in maritime greenhouse gas (GHG) emissions vis-à-vis 2008 levels epitomizes the last among a series of recent developments as regards sustainable shipping. It also sets the scene on what may happen in the future. Even though many experts and industry circles believe that the IMO decision is in line with the COP21 climate change agreement in Paris in 2015, others disagree, either on the ground that the target is not ambitious enough, or on the ground that no clear pathway to reach the target is currently visible. This book takes a cross-disciplinary view of the various dimensions of the maritime transportation sustainability problem. “Cross-disciplinary” means that a variety of angles are used to examine the book topics, and these mainly include the technological angle, the economics angle, the logistics angle, and the environmental angle. The book reviews models that can be used to evaluate decisions, policy alternatives and trade-offs. For sustainable shipping, a spectrum of technical, logistics-based and market based measures are being contemplated. All may have important side-effects as regards the economics and logistics of the maritime supply chain, including ports and hinterland connections. The objective to attain an acceptable environmental performance, while at the same time respecting traditional economic performance criteria so that shipping remains viable, is and is likely to be a central goal for both industry and policy-makers in the years ahead. At the same time, policy fragmentation is likely to create distortions of competition and sub-optimal solutions. This book attempts to address these issues and identify better solutions. Sustainable Shipping: A Cross-Disciplinary View includes chapters that cover many relevant topics. These include a general view of maritime transport sustainability, green ship technologies, information and communication technologies (ICTs) for sustainable shipping, green tramp ship routing and scheduling, green liner network design and speed optimization. Market based measures, oil pollution, ship recycling, sulphur emissions, ballast water management, alternative fuels and green ports are also covered. The book concludes by discussing prospects for the future, with a focus on the IMO Initial Strategy.
"This book contains a unique wealth of information on sustainable shipping. The knowledge it provides is rigorous, complete, and well supported by statistics, technical reports, and scientific references. The treatment of the various topics is not only informative but also analytical and critical." —Gilbert Laporte, Maritime Economics & Logistics (12 May, 2020)

Psaraftis, Harilaos N.
Harilaos N. Psaraftis is Professor at the Technical University of Denmark (DTU), Department of Management Engineering, Management Science division. He has a diploma from the National Technical University of Athens (NTUA, 1974), two M.Sc. degrees (1977) and a Ph.D. (1979) from the Massachusetts Institute of Technology (MIT). He was Assistant and Associate Professor at MIT from 1979 to 1989 (Department of Ocean Engineering) and Professor and Director of the Laboratory for Maritime Transport (LMT) at NTUA from 1989 to 2013 (School of Naval Architecture and Marine Engineering). Harilaos' main interests are in transport optimization, and maritime and intermodal transport, with a recent focus on green transport, and maritime transport policy and regulations. He has been Principal Investigator (PI) or co-PI in some 50 research projects on various transportation subjects. Among the 24 EU projects he was involved in, he has coordinated 3 multi-partner EU consortia, including project SUPERGREEN on European Green Corridors (2010-2013). His published work includes four books, over 150 refereed articles in journals and conferences, over 130 other publications (including 17 book chapters) and over 180 lectures in various other conferences. His previous book was Green Transportation Logistics: the Quest for Win-Win Solutions (Springer, 2016). He has been on the editorial board of several journals, including Transportation Science (1987 to 2017), the WMU Journal of Maritime Affairs (since 2002), Maritime Economics and Logistics (since 2016) and Networks (since 2016). Since 2006 Harilaos has participated in many meetings of the International Maritime Organization (IMO), both at the Maritime Safety Committee (MSC) and the Marine Environment Protection Committee (MEPC). He has served as chairman of various MEPC correspondence and working groups. He and his group have received various academic and industry awards, including two from Lloyds List. In addition to his academic duties, Harilaos has served as CEO of the Piraeus Port Authority (OLP) for close to 5.5 years (1996 to 2002). His tenure has been linked with developments that include (a) Pireaus making the list of the top 50 world container ports (No. 41 in 1998) with traffic more than doubling from 575.000 TEU (1996) to 1.160.000 TEU (2001), and (b) the port being transformed from a public law undertaking into a corporation (1999). Harilaos is the 3rd longest serving CEO since OLP's inception in 1930, having served under four Ministers of Shipping in Greece.