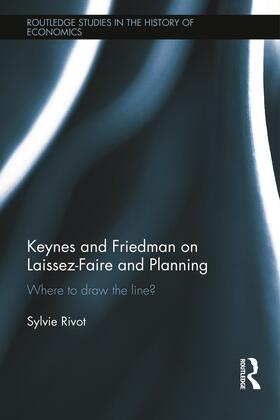 Rivot Keynes and Friedman on Laissez-Faire and Planning

‘Where to draw the line?’

Rivot Keynes and Friedman on Laissez-Faire and Planning

The 2008 crisis has revived debates on the relevance of laissez-faire, and thus on the role of the State in a modern economy. This volume offers a new exploration of the writings of Keynes and Friedman on this topic, highlighting not only the clear points of opposition between them, but also the places in which their concerns where shared.

This volume argues that the parallel currently made with the 1929 financial crisis and the way the latter turned into the Great Depression sheds new light on the proper economic policy to be conducted in both the short- and the long-run in a monetary economy. In light of the recent revival in appreciation for Keynes’ ideas, Rivot investigates what both Keynes and Friedman had to say on key issues, including their respective interpretations of both the 1929 crisis and the Great Depression, their advocacy of the proper employment policy, and the theoretical underpinnings of the latter. The book asks which lessons should be learnt from the Thirties? And what is the relevance of Keynes’ and Friedman’s respective pleas for today?

1. Introduction 2. Keeping the Keynesians off-stage 3. Private, public and semi-private institutions 4. The employment policy 5. The functioning of a monetary economy 6. Where to draw the line between laissez-faire and planning?