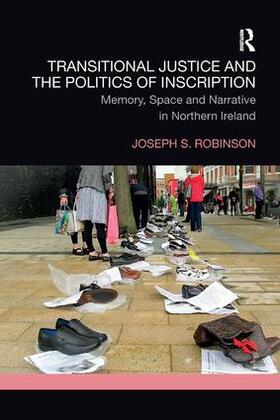 Robinson Transitional Justice and the Politics of Inscription

Robinson Transitional Justice and the Politics of Inscription

Taking Northern Ireland as its primary case study, this book applies the burgeoning literature in memory studies to the primary question of transitional justice: how shall societies and individuals reckon with a traumatic past? Joseph Robinson argues that without understanding how memory shapes, moulds, and frames narratives of the past in the minds of communities and individuals, theorists and practitioners may not be able to fully appreciate the complex, emotive realities of transitional political landscapes. Drawing on interviews with what the author terms "memory curators," coupled with a robust analysis of secondary literature from a range of transitional cases, the book analyses how the bodies of the dead, the injured, and the traumatised are written into - or written out of - transitional justice. The author argues that scholars cannot appreciate the dynamism of transitional memory-space unless they first engage with the often silenced or marginalised voices whose memories remain trapped behind the antagonistic politics of fear and division. Ultimately challenging the imperative of national reconciliation, the author argues for a politics of public memory that incubates at multiple nodes of social production and can facilitate a vibrant, democratic debate over the ways in which a traumatic past can or should be remembered.

Introduction: ‘The Voice of Sanity is Getting Hoarse:’ Historical Narratives in Northern Ireland

1. Where, Why, & How ‘Will We Remember Them?:’ The Bloomfield Report Revisited

6. The Politics of Inscription

7. It Should Never be Lost

8. We are All, Potentially, Homines Sacri

Robinson, Joseph
Joseph S. Robinson is a Ph.D. Candidate in the Department of Geography at Maynooth University, Maynooth,County Kildare, Ireland. He is an Irish Research Council Fellow and a Research Fellow at the Glencree Centre for Peaceand Reconciliation in Glencree,County Wicklow, Ireland. The research and first drafts of this book were written when he was a Researcher with The Junction, a community relations and peacebuilding non-profit located in the city of Derry, Northern Ireland.