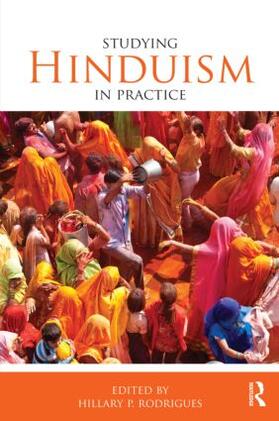 Drawing on personal experiences of Hinduism on the ground, this book provides a reflective context within which religious practices can be understood and appreciated. It conveys the rich realities of the Hindu tradition and the academic approaches through which they are studied. The chapters cover a wide range of topics, including dance, music, performance, festival traditions, temples, myth, philosophy, women’s practices, and divine possession. The engaging narratives are accompanied by contextual discussions and advice on such topics as conducting fieldwork, colonialism, Hindu seasonal celebrations, understanding deities, and aesthetics in Hinduism. All the entries are accompanied by photographs and suggestions for further reading.

Rodrigues, Hillary P.
Hillary P. Rodrigues received his PhD in Religious Studies from McMaster University. He is Professor of Religious Studies at the University of Lethbridge in Alberta, Canada, where he has been honored with a Distinguished Teaching Award. His books include Ritual Worship of the Great Goddess (2003), Introducing Hinduism (2006) andIntroduction to the Study of Religion with John S. Harding (2008).