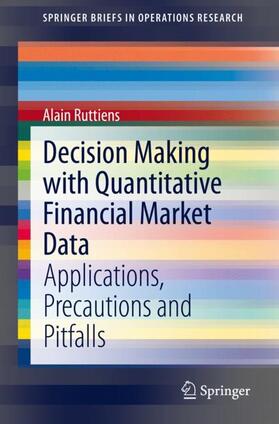 Use of quantitative data, especially in financial markets, may provide rapid results due to the ease-of-use and availability of fast computational software, but this book advises caution and helps to understand and avoid potential pitfalls.
It deals with often underestimated issues related to the use of financial quantitative data, such as non-stationarity issues, accuracy issues and modeling issues. It provides practical remedies or ways to develop new calculation methodologies to avoid pitfalls in using data, as well as solutions for risk management issues in financial market.

The book is intended to help professionals in financial industry to use quantitative data in a safer way.

Ruttiens, Alain
Alain Ruttiens is a former banker who has worked with major banks, beginning his career with Banque Indosuez (Belgium) and ending it as director of the Financial Engineering Department at CBC Banque (Brussels, an affiliate of KBC Bank). He is the founding partner of NEURON sàrl (Luxembourg), a consulting firm specialized in financial markets and funds management. He is also an Affiliate Professor at the Ecole Supérieure de Commerce de Paris (France) and teaches or has taught at several universities and institutions, including the HEC Paris, Sorbonne University of Paris I, the Institut d'Etudes Politiques (Paris), the CSVG (Vietnam) and the Ecole Supérieure des Affaires, Beirut (Lebanon). Alain is the author of several books and research papers.