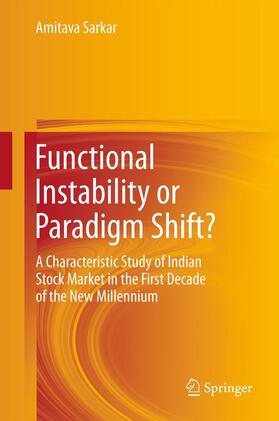 The study investigates the working of the Indian stock market in recent years and attempts to look for functional instability, if any, embedded in the stock market. Specifically, it explores to discern whether there been any significant change in recent years in Indian stock market and the nature and characteristics of such changes, if any. It chooses the nine year period from 1999 to 2008. Over this period, stock market witnessed some major price changes: one in late 1999 that ended in mid 2001, another that commenced from mid 2004 and a recent one that in effect commenced from early 2008. There is significant volatility in the market with presence of risk premium;there is asymmetric impact. The market responds more to the negative shocks. The global stock market is having its influence on Indian stock market. The impact of developed country effect, particularly, that of US stock market has been the most prominent. There is some evidence for regional contagion. When we look at the domestic sectors, we see that the traditional sectors, -Capital Goods and Consumer Durables,are the two most predominant sectors. Other sectors, particularly the IT sector, have only a mild, almost insignificant impact on market volatility and transmits very little of its volatility to other sectors.

Sarkar, Amitava
Prof. Amitava Sarkar, M.S., Ph.D (CMU, Pittsburgh) is currently Professor and Director at its School of Management, West Bengal University of Technology (WBUT); he also served in the recent past as Vice-Chancellor (Actg.), West Bengal University of Technology (WBUT). He taught for a number of years, among others, at Southern Illinois, Pittsburgh, CMU, Indian Statistical Institute, and was Head of Calcutta University’s MBA Programme at Indian Institute of Social Welfare & Business Management and a member of Post-Graduate Faculty Council, Management, Commerce & Social Welfare at University of Calcutta. He is also currently a member of Academic Council, Central University of Orissa. An economist by training, he specializes in areas of business economics, macro, financial economics, international finance, econometric/forecasting techniques. He had been an economist member in (World Bank initiated) project on socioeconomic survey for and preparation of economic /financial profile for the project affected at Farakka Power project of National Thermal Power Corporation. He also directed and authored a Planning Commission, India Govt. funded Project on financial fragility, capital structure & rate of growth in the Indian economy, 2001. He was invited to present his research on “Indian Transition toward New Economy” at the New Economy in Development Conference at the WIDER (World Institute for Development Economics Research), United Nations University at Helsinki, May 2002. He was also invited by the University of Foggia, Italy to participate in the deliberations of a Project on Globalization and Economic Enterprise, 2005. He has in the recent past completed directing as Principal Investigator a UGC (University Grants Commission, Govt. of India) major project entitled “Functional Instability or Paradigm Shift? A Study of Indian Stock Market in Recent Years”.