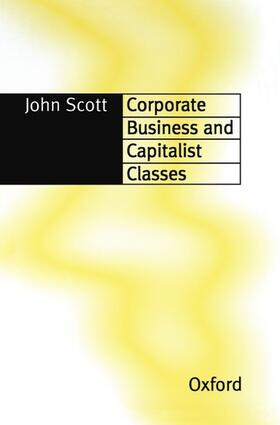 Large multinational corporations shape our lives to an enormous extent. How is the growth, power, and significance of big business to be explained and understood? Focusing on the issues of ownership, control, and class formation, Corporate Business and Capitalist Classes explores the implications of changes in the nature of big business, which affect both the businesses themselves, and the economic and political milieu in which these multinationals operate. Up-to-date empirical evidence is reviewed in a wide-ranging comparative framework that covers Britain and the United States, Germany, France, Japan, and many other societies, including emerging forms of capitalism in China and Russia. Unlike other specialist texts in the area, Corporate Business and Capitalist Classes relates its concerns to issues of social stratification and class structure. The first and second editions of the book (under the title Corportations, Classes and Capitalism) were enthusiastically received, and the present edition reviews new theoretical ideas and empirical evidence that has emerged in the ten years since the second edition appeared. The text has been completely re-written and re-structured, and it relates its concerns to contemporary debates over `disorganized capitalism' and post-industrialism.