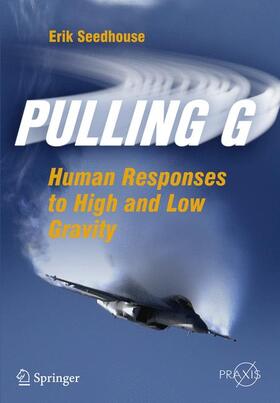 Performing in a high G environment is extremely demanding on the body: pulling G forces blood to the body’s extremities, putting the pilot, astronaut or driver at risk of G-Induced Lack of Consciousness (G-LOC). In “Pulling G” Erik Seedhouse describes what it feels like to pull 7 G in a fighter plane and the G pressures on the body when driving a Formula 1 car and many other gravity-defying vehicles. The book relates, for the first time, the effects of G in both hyper-gravity and microgravity. It describes the human response to increased and decreased G and the potentially dangerous effects of high G, with particular reference to dynamic injuries sustained in high acceleration environments. “Pulling G” provides an overview of G-related research and the development of intervention methods to mitigate the effects of increased and reduced G. As well as relating the training required to overcome G-forces on the Formula 1 track, Erik Seedhouse looks at the G forces encountered in such G environments as ejection from an aircraft, launch/re-entry, and zero-G. The book also considers how artificial gravity can be used to prevent bone demineralization and to reduce the effects of de-conditioning in astronauts.

Erik Seedhouse is eminently qualified to describe the effects of large accelerations on the body. In addition to being the author of several previously published Springer Praxis books, he has developed astronaut-training protocols and is the training director for Astronauts for Hire (A4H). He is also the Canadian Forces’ High Risk Acceleration Training Officer.

Seedhouse, Erik
Dr. Erik Seedhouse worked as Astronaut Training Consultant for Bigelow Aerospace in 2005, a company for whom he wrote the Spaceflight Participants Flight Surgeon’s Manual. He also developed astronaut-training protocols for future spaceflight participants and wrote and edited several chapters of Bigelow Aerospace’s Astronaut Training Manual. Erik is a research scientist specializing in environmental life sciences and physiology, the subject in which he obtained his Ph.D. in Physiology while working for the European Space Agency between 1996 and 1998. In 2009, he was one of the final candidates for selection as an astronaut in the CSA’s Astronaut Recruitment Campaign. He is the Training Director for Astronauts for Hire (A4H) and is the Canadian Forces’ High Risk Acceleration Training Officer, which means he spins CF pilots in Canada’s centrifuge.