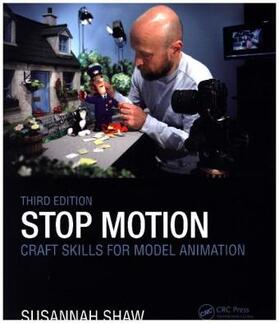 Stop motion animation is a challenging andtime-consuming skill that requires patience, adaptability, and a close eye to detail. Stop Motion: Craft Skills for Model Animation, 3rd Edition is the essential guide to help stop motion animators overcome these challenges of this highly-skilled craft. Author Susannah Shaw provides a step-by-step guide to creating successful stop motioin films. Starting with some basic exercises, the reader will learn about developing a story, making models, creating sets and props, the mechanics of movements, filming postproduction, and how to set about finding that first elusive job in a modern studio.
Key Features

Shaw, Susannah (Programme Development Manager for the Animated Exeter festival. Head of the Bristol Animation Course from 1996 to 2000 at the University of the West of England, and former camera assistant at Aardman.)
Shaw, Susannah

Chapter 7
Four walls and a sky - Sets and props

Chapter 9
The mechanics of movement

Chapter 11
Under the lens

Chapter 13
Getting the job - The business of animation

Shaw, Susannah (Programme Development Manager for the Animated Exeter festival. Head of the Bristol Animation Course from 1996 to 2000 at the University of the West of England, and former camera assistant at Aardman.)
Since November 2014, Susannah has been CEO of the Curzon Cinema & Arts in Clevedon, North Somerset, a unique independent cinema, that has run continuously since 1912.
Previously, she was director of Animated Exeter, a lively annual animation festival. In 1996 she founded the Bristol Animation Course at the University of the West of England, supported by Aardman Animations. It was this course along with several years working on and off at Aardman in the camera department that resulted in her first Stop Motion book.
Susannah has also directed radio and television programmes for the BBC, having worked at BBC Bristol as an assistant editor and in the distant past, an assistant animator on the series, Animated Conversations, the BBC's precursor to Channel 4's LipSynch series.