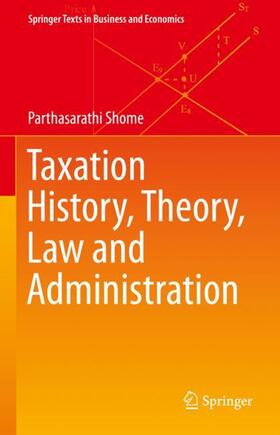 Tax practitioners are unfamiliar with tax theory. Tax economists remain unfamiliar with tax law and tax administration. Most textbooks relate mainly to the US, UK or European experiences. Students in emerging economies remain unfamiliar with their own taxation history. This textbook fills those gaps. It covers the concept of taxes in regards to their rationale, principles, design, and common errors. It addresses distortions in consumer choices and production decisions caused by tax and redressals. The main principles of taxation—efficiency, equity, stabilization, revenue productivity, administrative feasibility, international neutrality—are presented and discussed. The efficiency principle requires the minimisation of distortions in the market caused by tax. Equity in taxation is another principle that is maintained through progressivity in the tax structure. Similarly, other principles have their own ramifications that are also addressed.

A country’s constitutional specification of tax assignment to different levels of government—central, state, municipal—are elaborated. The UK is more centralised than the US and India. India has amended its constitution to introduce a goods and services tax (GST) covering both central and state governments. Drafting of tax law is crucial for clarity and this aspect is addressed. Furthermore, the author illustrates different types of taxes such as individual income tax, corporate income tax, wealth tax, retail sales/value added/goods and services tax, selective excises, property tax, minimum taxes such as the minimum alternate tax (MAT), cash-flow tax, financial transactions tax, fringe benefits tax, customs duties and export taxes, environment tax and global carbon tax, and user charges. An emerging concern regarding the inadequacy of international taxation of multinational corporations is covered in some detail. Structural aspects of tax administration are given particular attention.

Shome, Parthasarathi
Parthasarathi Shome is Chairman of the International Tax Research and Analysis Foundation in India, and Visiting Senior Fellow at the London School of Economics (UK). He received Brazil's highest civilian honour, Commander of the Order of the Southern Cross, for his contributions to Brazilian fiscal reform. He was Minister of State and Adviser to the Indian Finance Minister and Chairman of the Tax Administration Reform Commission in India. Earlier, he was Chief Economist at the Revenue and Customs organization in the UK, Chief of Tax Policy at the IMF and Professor of Economics at American University in Washington DC (USA). He was the Director of two national research organisations in India. Additionally, he chaired India's Ninth and Tenth Five Year Plan task forces on tax policy and administration. He is a Member of the Board of international fiscal organisations. He is widely published in peer reviewed journals and is the author of many books.