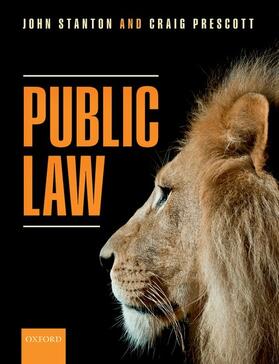 Fresh, modern, and practical, Public Law provides law undergraduates with a unique approach to constitutional and administrative law, aptly demonstrating why this is an exciting time to be studying the subject.

Writing in a fluid, succinct style, the authors carve a logical pathway through the key areas studied on the LLB, guiding students to a solid understanding of the fundamental principles. This theoretical grounding is then rooted in reality, with each concept applied to a hypothetical scenario (included at the start of each chapter) to set it into a practical context.

While this practical element helps students to understand how the law applies and develop problem-solving skills, a trio of supportive learning features also encourages active engagement with and a critical appreciation of public law. 'Key case' boxes highlight and analyse the significant case law in each area; 'Counterpoint' boxes flag alternative viewpoints and areas of debate; and 'Pause for reflection' boxes prompt readers to consider the impact of laws, and what potential developments and
reforms may lie ahead.

Public Law's modern approach and unique combination of practical application and theoretically critical discussion makes it the ideal choice for students seeking to understand concepts not only in the abstract but in practice, helping them to develop the skills they need to succeed at university and beyond.

Stanton, John
Dr John Stanton is Senior Lecturer in Law at The City Law School, City, University of London, specializing in constitutional law and localism. He has considerable experience researching and teaching public law to undergraduates, and won the 2017 City Law School 'Teaching in Schools' award at City Students' Union's Learning Enhancement Awards. John is a Fellow of the Higher Education Academy and an active member of the UK Constitutional Law Association and the Society
of Legal Scholars (he has been Deputy Convenor of Public Law since 2012).

Dr Craig Prescott is a Lecturer in Law at the University of Winchester, having previously taught at King's College London and the University of Manchester. He teaches and conducts research into constitutional law, focusing particularly on elections, parliament, the future of the monarchy, and the constitutional implications of Brexit. Craig frequently appears in the media to discuss political issues, including Brexit, and he is a member of the Society of Legal Scholars, the UK Constitutional
Law Association, and the Study of Parliament Group.