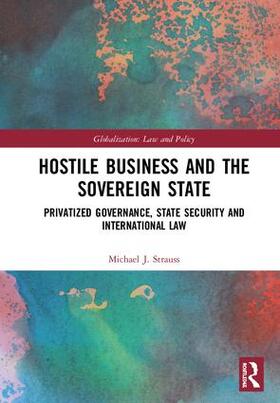 This book describes and assesses an emerging threat to states’ territorial control and sovereignty: the hostile control of companies that carry out privatized aspects of sovereign authority. The threat arises from the massive worldwide shift of state activities to the private sector since the late 1970s in conjunction with two other modern trends – the globalization of business and the liberalization of international capital flows. The work introduces three new concepts: firstly, the rise of companies that handle privatized activities, and the associated advent of "post-government companies" that make such activities their core business. Control of them may reside with individual investors, other companies or investment funds, or it may reside with other states through state-owned enterprises or sovereign wealth funds. Secondly, "imperfect privatizations:" when a state privatizes an activity to another state’s public sector. The book identifies cases where this is happening. It also elaborates on how ownership and influence of companies that perform privatized functions may not be transparent, and can pass to inherently hostile actors, including criminal or terrorist organizations. Thirdly, "belligerent companies," whose conduct is hostile to those of states where they are active. The book concludes by assessing the adequacy of existing legal and regulatory regimes and how relevant norms may evolve.