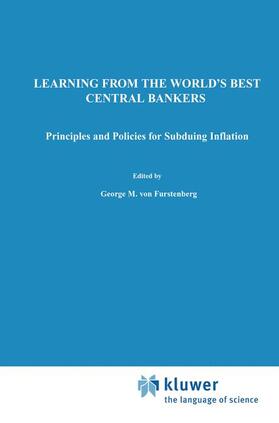 Principles and Policies for Subduing Inflation

BURTON G. MALKIEL Chemical Bank Chairman's Professor of Economics Princeton University Central bankers have often believed that they are the Rodney Dangerfields of public officials-they seldom receive respect from the public or from elected officials. Particularly in the days of high infla­ tion and substantial unemployment, they were held responsible for everything that ailed the world's economies. And monetarists often suggested that nations would be far better off if central bankers were replaced by robots who would do nothing more than ensure that the money supply was increased at a fixed percent each year. Our views have changed considerably over the past two decades. The main reason is that, thanks in substantial part to the efforts of central bankers, inflation has generally been contained. With the re­ duction in inflation and the recent relative stability of price levels in most developed nations, risk premiums have tended to decline sharply. Moreover, unemployment rates, at least in the Western Hemisphere, have decreased substantially. Finally, even many economists who con­ sider themselves monetarists now tend to be less certain of the stabil­ ity of the link between the money supply and economic activity. Thus, there is greater appreciation of the critical role of judgment in the conduct of monetary policy and a general belief that the judgments central bankers have made have generally been sound.