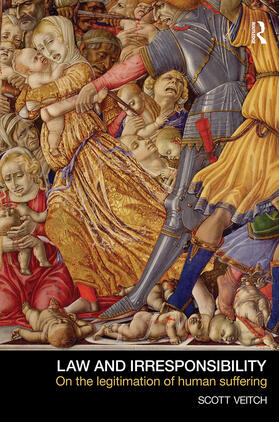 On the Legitimation of Human Suffering

Law is widely assumed to provide contemporary society with its most important means of organizing responsibility. Across a broad range of areas of social life – from the activities of states and citizens, to work, business and private relationships – it is understood that legal regulation plays a crucial role in defining and limiting responsibilities. But Law and Irresponsibility pursues the opposite view: it explores how law organizes irresponsibility.
With a particular focus on large-scale harms – including extensive human rights violations, forms of colonialism, and environmental or nuclear devastation – this book analyzes the ways in which law legitimates human suffering by demonstrating how legal institutions operate as much to deflect responsibility for harms suffered as to acknowledge them. Drawing on a series of case studies, it shows not only how law facilitates the dispersal and disavowal of responsibility, but how it does so in consistent and patterned ways.
Irresponsibility is organized, and its organization is traced here to the legal forms, and the social and political conditions, that sustain ‘our’ complicity in human suffering.
This innovative and interdisciplinary book provides a radical challenge to conventional thinking about law and legal institutions. It will be of considerable interest to those working in law, political and legal theory, sociology and moral philosophy.