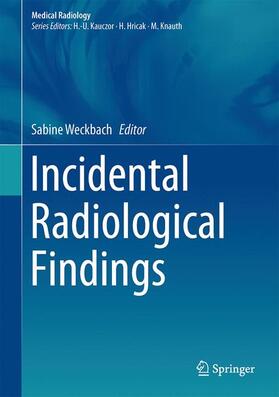 This book covers incidental radiological findings (IFs) from different perspectives, provides interesting ethical background information, highlights the differences between IFs in clinical routine and during research studies, explains the management of IFs with reference to practices in different countries. The prevalence of IFs is increasing due to the wider use of modern imaging modalities in routine clinical practice and large population-based cohort studies. The reporting of these findings may lead to further diagnostic investigations and treatment and must therefore be handled with knowledge and care. The management of IFs in clinical routine is regulated by the guidelines of the different academic societies, while management in the setting of research studies depends on a variety of factors. In general, IFs must be disclosed to the imaged subject if they are potentially clinically relevant, but subjects must also be protected from the consequences of false positive findings. This book, written by distinguished experts in their fields, discusses all these issues and will be of interest to radiologists, other clinicians, and radiographers/technicians.

4. (Technical) prerequisites of population based imaging

Part IV: Differences between IF in population based imaging and patients:

Sabine Weckbach graduated from Ludwig-Maximilians-University in Munich, Germany, in 2003. Her medical studies included training at the Mount Sinai Medical School, New York, USA, University of California in San Diego, USA, and Kantonspital St.Gallen, Switzerland.
Professor Weckbach was trained in radiology at Ludwig-Maximilians-University in Munich under the guidance of Professor Maximilian Reiser and had her radiology board examination at University Medicine Mannheim in 2009. In 2010, she became a faculty member and associate professor at the Department of Radiology, Ludwig-Maximilians-University, Munich. In 2012 Sabine Weckbach became associate professor at the Department of Radiology in Heidelberg (Department chair: Professor Kauczor) and in May 2016 she was announced full professor of Radiology. Professor Weckbach's research focuses on MR imaging of musculoskeletal and inflammatory diseases, musculoskeletal diagnostics and whole body MR imaging. Moreover, she is deeply involved in the MR imaging part of the German National Cohort and is co-leading the MR Imaging Core for Incidental Findings of the German National Cohort.