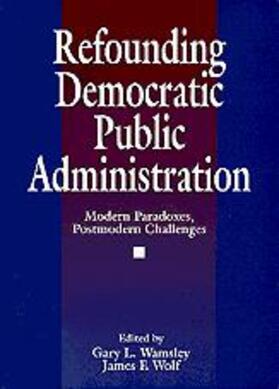 The contributors to this volume contend that the North American political system is undergoing a serious governmental crisis - political leaders know only how to campaign, not how to gain consensus on goals or direct a course that is to the good of the nation. Public administration is therefore forced to compensate for the growing inadequacy of the `leaders', and with a normative-based body of theorizing, perform its key role of governance within a democratic system of polycentric power.

The book offers a revisualization of the relationship between public servants and the citizens they serve, and a continuing discourse on how public administration can constructively balance forces of change and stability in order for democracy to evolve and mature.