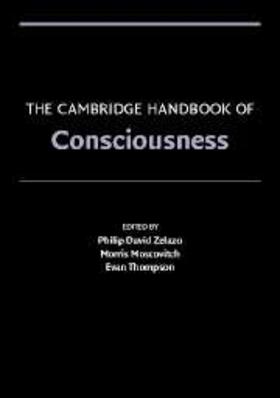 The Cambridge Handbook of Consciousness is the first of its kind in the field, and its appearance marks a unique time in the history of intellectual inquiry on the topic. After decades during which consciousness was considered beyond the scope of legitimate scientific investigation, consciousness re-emerged as a popular focus of research towards the end of the last century, and it has remained so for nearly 20 years. There are now so many different lines of investigation on consciousness that the time has come when the field may finally benefit from a book that pulls them together and, by juxtaposing them, provides a comprehensive survey of this exciting field. An authoritative desk reference, which will also be suitable as an advanced textbook.

Zelazo, Philip. David
Philip David Zelazo is Professor of Psychology at the University of Toronto, where he holds a Canada Research Chair in Developmental Neuroscience. He is also Co-Director of the Sino-Canadian Centre for Research in Child Development, Southwest University, China. He was Founding Editor of the Journal of Cognition and Development. His research, which is funded by both NSERC of Canada and CIHR, focuses on the mechanisms underlying typical and atypical development of executive function - the conscious self-regulation of thought, action, and emotion.

Moscovitch, Morris
Morris Moscovitch is the Max and Gianna Glassman Chair in Neuropsychology and Aging in the Department of Psychology at the University of Toronto. He is also the Senior Scientist at the Rotman Research Institute of Baycrest Centre for Geriatric Care. His research focuses on the neuropsychology of memory in humans while also studying attention, face-recognition, and hemispheric specialization in young and older adults, and in people with brain damage.

Thompson, Evan
Evan Thompson is Professor of Philosophy at the University of Toronto. He is the author of Mind in Life: Biology, Phenomenology, and the Sciences of Mind and Colour Vision: A Study in Cognitive Science and the Philosophy of Perception. He is also the co-author of The Embodied Mind: Cognitive Science and Human Experience. He is a former holder of a Canada Research Chair.