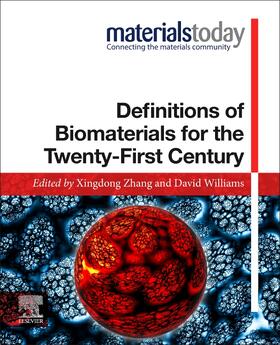 Zhang / Williams Definitions of Biomaterials for the Twenty-First Century

Zhang / Williams Definitions of Biomaterials for the Twenty-First Century

Definitions of Biomaterials for the Twenty-First Century is a review of key, critical biomaterial terms and definitions endorsed by the International Union of Societies for Biomaterials Science and Engineering. The topics and definitions discussed include those in general biomaterials and applications, biocompatibility, implantable and interventional devices, drug delivery systems, regenerative medicine and emerging biomaterials. The book reviews the discussion of these terms by leaders in the global biomaterials community and summarizes the agreed upon definitions.

Zhang, Xingdong
Xingdong Zhang is a professor of Sichuan University, and President of the International Union of Societies for Biomaterials Science and Engineering (IUSBSE), and Honorary President of the Chinese Society for Biomaterials (CSBM). His research focuses on calcium-phosphate biomaterials and implantable medical devices for musculoskeletal system. In 1983, he was the first in China to research and develop hydroxyapatite (HA) ceramics and related synthetic bone grafts. In 1987, he was the first in China to design and develop titanium dental implants and total hip replacements (THR) with plasma-sprayed hydroxyapatite (HA) coatings. He was one of the pioneers in the world to find and confirm that porous calcium phosphates ceramics can induce bone formation in 1991. To date, three companies founded by him have obtained six Registration Certificates for Medical Devices issued by the China Food and Drug Administration. 20 series of products with over 200 different specifications have been commercialized and applied to dozens of thousand cases in near 1000 Chinese hospitals. Prof. Zhang has made significant contributions to the development of biomaterials science and engineering in China and the world. As one of the major participants, he has drawn up a series of National Strategic Plans for biomaterials development in China since the end of last century. He founded the first national center for biomaterials research in China in 2000-the National Engineering Research Center for Biomaterials. Prof. Zhang served as an Observer (1992-1996) of the ILC and a Delegate (1996-2008) of the IUSBSE. He has initiated and organized a series of bilateral and multilateral biomaterials meetings at home and abroad. Especially, as President of the 9th World biomaterials Congress, he successfully organized a superb congress which was highly regarded at home and abroad. Prof. Zhang has numerous honors and awards. He is a Member of the Chinese Academy of Engineering, Foreign Member of the National Academy of Engineering, Fellow of the IUSBSE and the American Institute of Medical and Biological Engineering, winner of National Natural Science Award of China (Second Prize), National Science and Technology Progress Award of China (Second Prize), Sharma Award from the Society for Biomaterials and Artificial Organs (India), Hashiguchi Lungi Fund Award (Japan), and Outstand Contribution Award (CSBM), and the 2015 Clemson Award for Applied Research (US).

Williams, David
At the time Professor Williams started his career in biomaterials science, in 1967, there were, in fact, very few materials in clinical use. He worked alongside some of the early pioneers in implant surgery, including Charnley, the inventor of total hip replacement, and quickly realized that too little was known about the host response to implanted biomaterials for there to be any reasonable hope of routine success. He wrote the first monograph on this subject in 1973 in order to place the existing scientific knowledge into the perspective of the amazing potential that reconstructive surgery offered. He then set out to develop in vitro and in vivo systems to explore the subject of biocompatibility, encompassing phenomena such as polymer biodegradation, physiological metallic corrosion, the role of the immune response in the biocompatibility of synthetic biomaterials and mechanobiology. Crucially, he developed systems for the quantification of the host response to biomaterials, using, for the first time, the combination of immunohistochemistry and image analysis. He went on to study, and introduce into clinical practice, some high performance engineering biomaterials, including new titanium alloys, silverbased products, highly biostable polyurethanes, biodegradable polymers such as the PHB family and thermoplastics such as PEEK. He went on, through directing two of the major collaborative programs in tissue engineering in Europe to identify the essential specification parameters for tissue engineering biomaterials. He has received the major awards of all biomaterials-based societies, and is an academician in the UK, being elected as a Fellow of the Royal Academy of Engineering in 1999. He is one of the very few foreign members of the American Institute of Medical and Biological Engineering. In 2012 he received the Gold Medal of the Acta Biomaterialia Group, the most prestigious international honor in biomaterials science, being only the fifth person ever to receive this award. He was also elected as a Founding Fellow of the Tissue Engineering and Regenerative Society International, as one of 24 global leaders in this field.

Professor Williams remained research active at the University of Liverpool until he left the UK in 2007 and now has high-level positions in several countries. His main location is at the Wake Forest Institute of Regenerative Medicine in North Carolina, USA, where he is Professor of Biomaterials and Director of International Affairs. During the last decade he has worked extensively on issues of balancing risk and innovation in medical technology, and has written several Opinion Papers on which new European legislation has been based, including public health issues concerned with latex, PVC, dental amalgams and so on. In recent years he has devoted more time and energy to the development of new research strategies and the promotion of biomaterials science and regenerative medicine, and has advised governments and institutions around the world on these matters. His recent publications on the nature of biomaterials and the mechanisms of biocompatibility are already seen as seminal works in the evolution of biomaterials science. His primary focus has been as Editor-in-Chief on the journal Biomaterials, which he has now taken to the top position in the world's journals in this area, and indeed into the top 100 of all of the world's scientific journals. He travels extensively, especially in Asia, to promote excellence in scientific research and writing. In the pursuit of the globalization of excellence in biomaterials research, he has been elected to the position of President-elect of TERMIS, the international society concerned with regenerative medicine, and is actively promoting the application of biomaterials science in Asia and Africa.