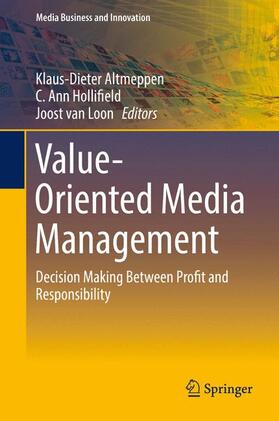 Decision Making Between Profit and Responsibility

In the light of a rapidly changing media industry with new technologies, actors and advertising models, and the critical role of media in society, this volume highlights the meaning of different values in media companies and media managers’ decisions. It discusses how economic as well as societal values can be equally integrated in media management processes and how such values affect the internal as well as external environment of media companies. The contributions analyze various issues in media management, such as the relationship between quality and audience demand, the role of branding in building values, changes in the value chain, and the impact of deregulation. Further important topics include hypercompetition, mediatization, challenges for media managers and the meaning of corporate social responsibility.

Altmeppen, Klaus-Dieter
Klaus-Dieter Altmeppen is Professor of Journalism in the School of Journalism at the Catholic University (CU) Eichstaett-Ingolstadt in Germany. His research focuses on the area of media (economics, management, and organisations). Furthermore Professor Altmeppen works on journalism structures and ethics as well as on entertainment acquisition and production. Altmeppen was president of the German Communication Association (DGPuK) from 2010-2014 and Dean of the Faculty of Literature and Languages at the CU from 2011-2013.

C. Ann Hollifield is the Thomas C. Dowden Professor of Media Research in the Grady College of Journalism & Mass Communication at the University of Georgia in the United States. Her research focuses on media management and economics, and media in economic development, with a focus on how organizational and economic structures effect media performance. Professor Hollifield has served as Head of the UGA Department of Telecommunications (2008-2014), Associate Editor of the International Journal on Media Management, and Chair of the Standing Committee on Research for the Association for Education in Journalism and Mass Communication (2011-2012).

Joost van Loon is Professor of Sociological Theory at the Catholic University of Eichstaett-Ingolstadt. His research is concerned with theoretical engagements with social and cultural processes with a specific focus on media and technology. Professor van Loon is editor-in-chief of the journal Space and Culture and his publications include the monographs Risk and Technological Culture (2002) and Media Technology: Critical Perspectives (2008).